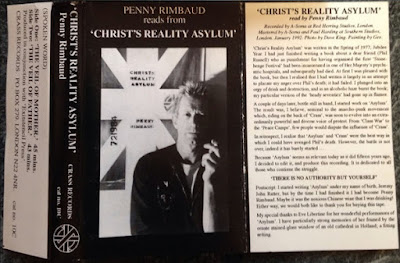 Good looking lad was Penny, the Chuck Manson of Anarchy,but as if Kirk Douglas was transcribed into the role of 'Johnny Rotten' in Alex Cox's dismal Sid and Nancy,as adapted for Radio Four's 'A Book at Bedtime'.
Here, the velvet voiced leader of the Anarchists,applies to be the leader of the Anti-christs, masturbating with Jesus against the wall of  Gethsemane. Jerry show's a rare ability to say 'Clitoris' without sniggering, as he describes rude goings on with Notre Dame and her masochistic son. Between the sex scenes it becomes clear that Christ's name is writ large above the gates of Auschwitz ......there you go, I mentioned the 'A' word,so the Holocaust Denial Algorithm has been triggered.So lets not disappoint them,as Christs name was indeed tattooed all over the genocide,like the myth's of human skin lampshades, but not whispered in the Soviet built gas chamber that Atrocity Tourists are told is the real thing......fact....the real thing is,allegedly, the pile of rubble just off the guided tour's well-trodden path. As Jeremy says, "Truth is a personal ghetto".
This endurance testing spoken word anti-christian missive is full of great quotes like that,and there's no doubt Rimbaud fancies himself as a bit of a poet,but there's something of the English O'Level failure about this taboo testing monologue that's just a bit toe-curling,but more comfortable to listen to than the version played out by one of the Crass Posh Birds on the single version......." I Vomit for you Jesu!"
I know Rimbaud was a randy old sod,who dangled 'Punk' credibility like a bag of sweeties and a promise to see his puppies. This tasty carrot led to his squat,forward slash,commune, at Dial House to be swarming with confused,impressionable young spiky tops. There, it was Rimbaud who was nailed to his own Cross,and no doubt every day they were subjected to his daily sermon on the mount,but re-located to the holylands of Essex in 1979. I'm not suggesting that our Pen had a rampaging case of Messiah Syndrome, but I sense he may be slightly envious of Jesus H.Christ,whatever he,or it,was.They both seem to refuse to die,despite Rimbaud's plea's.
Side A,"The Veil Of Mother" is in fact a rather good piece of prose, assassinating ,finally, the myth of Christ, but with added mucky stuff. This guy should have been an actor instead of a cult leader.Larry Olivier couldn't have done any better.Rimbaud's pronunciation of "Auchwitz" is second only to Sir Laurence's narrations for "The World At War".I would love to see Sir Jeremy as Henry The Fifth.....with a few adaptations of the bard's holy words to include,with some help from his IRA buddies, the creation of an Anarchist republic preceding Henry's death on his own cross.Then came the executions.
Side B ,"The Veil Of Father" isn't quite as poetic, as it stoops to the obvious state control angle, and...choke..Politics! Like a twentieth century translation of the King James Bible.It's a bit cringe,....quite true...but bleeding obvious innit? Jerry does refer to himself in the third person a lot,which he can excuse away as referring to himself as Jeremy John Ratter,before he chose his own identity as Penny Rimbaud....the Penny bit coming from his brother who called him,quite accurately as it happens, a toilet Seat Philosopher.
It does, however, feature a short appearance of Zippy from Rainbow as an american newsreader,and is ,altogether, a seductive journey into popular post-truth political philosophy for the casual BBC book at bedtime listener...who,likely, already agrees 100% with Rimbaud's rantings,oozing from the speakers like molten chocolate.
I wanna be an Anarchist  too...they scream,as they scratch their 'X',or their 'cross', in the liberal-Democrat box.
I'd be an Anarchist too if I wasn't the bloody minded Nihilist bastard that I am.
Tracklist:

If I could make a request, I would like to see some Wayne Butane on this blog