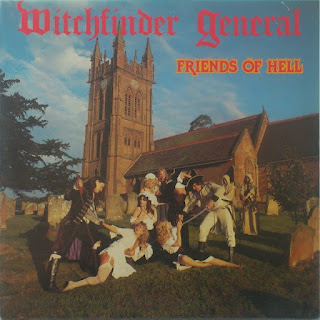 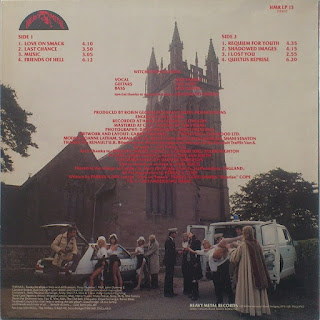 Here's another one of those 'guess what I was doing today' posts.
Can't wait, can you,to know what inane pointless activity someone you've never met was doing today? I've saved you the humiliation of looking at a selfie of me sucking in my cheeks while I indulge in this aforementioned vacuous attempt to live a fulfilling life experience.
I went to a Vide-Grenier (Boot Sale)in a small town (Lodeve) in southern France near where I live......amazing huh?
I rifled through endless platters of Claude Francois, a bloke called Renaud, and what seemed like hundreds of copies of French Nouvelle Vague band,the terminally awful 'Telephone';when I saw an album cover that makes Spinal Tap's 'Smell The Glove' seem woke.
That was clearly an English Church on the cover,with three or four long-haired chaps in 17th century outfits bullying a few scantily clad maidens wearing some very un-17th century stockings and suspenders,while a couple of dodgy monks look on stood in the graveyard.This must be good...and it got better.
On the reverse of the sleeve, the 20th century Police have turned up and proceed to arrest all and sundry,making sure we all get a good look at the ladies underwear as they are carted off in the paddy wagon.
"C'est Combien?" I asked the kind long haired gentleman casually chatting with another modern long-haired gentleman.
"Cinq" he said rather dismissively,to which I crossed his palm with gold and sloped off with my booty to a waiting car and sped homewards to discover the rare delights that may be hidden inside this hilariously good bad album cover.
Of course this was the second album by New Wave Of British Heavy Metal (NWOBHM)cult favourites, Witchfinder General,...who are also, inexplicably,considered an early example of Doom Metal(?).
There ain't much Doom Metal about this record, I discovered.Rather than sounding like 'Spinal Tap',they had the production values of UK comic strip equivalents 'Bad News'.And rather than a 16 rpm version of Black Sabbath's Volume 4, we get a Poundshop Diamond head.
NWOBHM kind of passed me by,so I was blissfully unaware of Witchfinder General,and many of their cohorts;but I understand that however silly most Metal records were around 1975 to 1988,the new wave of UK bands sub-consciously absorbed the 'Punk' influence to speed things up and add some much needed intensity and relevance to actual real life.Most Punk bands were virtually Heavy Metal anyway,just without the show-offy parts.
Ugh! Those bloody offensive guitar solo's remained for the much part,but slowly edited themselves out by the time Metal got darker and experimental at the end of the 80's.Now it's virtually the only form of the Rock idiom that survives,albeit in a veritable cornucopia of styles and sub-genres.
Is there any group out there called 'Bitchfinder General' by any chance,which seems a more appropriate combo for the cover art on this museum piece.It really is something from another time and maybe even another planet.Forget the past and we will be doomed to repeat it....now where's that cockamamie History Eraser Button?
Tracklist:
Love On Smack 4:10
Last Chance 3:50
Music 3:05
Friends Of Hell 6:12
Requiem For Youth 4:35
Shadowed Images 4:15
I Lost You 2:55
Quietus 6:20
Reprise 0:35

DOWNLOAD a new friend from hell HERE!
Posted by Jonny Zchivago at 00:36

I am Ecstatic to hear someone point out what shouldve always been obvious, that punk was metal! There was an attitude among the punks that turned their noses up at metal. I think Satellite by the pistols explains it all rather clearly. Thanks for the post!

Nope! Piontless discussion, I know. But
In my opinion Punk was the opposite of metal.The hard rock elements of the Pistols records and their costumes might have helped establish the idea that punk was kind of metal.
But much of their public image was not what many considered punk either. Public Image ltd. on the other hand was punk and nothing metal apart .f om the Box.

re-pointless punk discussion:
The Ramones started it by playing blatant heavy metal....lets face it they even looked and dressed like Iron Maiden.
Pistols,and 2nd album Damned were Metal,then we had the Lydon/Vicious dichotomy.....Lydon went in the Post Punk direction which expunged all elements metal(returned briefly for that shite 'Album' record),and some would say it wasn't rock music at all. Most of the Punk bands didn't even have any Punx in the line up.....the pistols certainly didn't,except forJohnny's hair-do.
The Vicious route led to the absurd Exploited/USHardcore/Grunge NWOBHM/UK82 route which unarguably was pure Metal,and these types took over/won and now its ALL Metal.
Just look at the Festivals...the Punk festivals are 100% sad nostaalgia, and the Metal Festivals are growing exponentially....thats where the 'punk' went.

PS..of course the perfect amalgam of a Punky Metal alloy was mighty pub rock legends Motorhead who may well be responsible for actually inventing Music itself....full stop/period.They died for you.

And the New York Dolls were classed as Glam, but were really a really sloppy metal bend that loved the Coasters and Shirelles. Same with the stooges.

At last an Unknown comment leaver who makes sense...right there with yer for the Dolls and Stooges.

Paranoid is a punk song. I'll go so far as to ask who's more punk, The Clash or early Sabbath? I know who I'm picking. Forgive me, I'm starting to sound an old editorial in Maximum Rock and Roll.

Well The Clash's second LP certainly had a metal budget with their overdriven guitars and crisp drum sounds,and i bought it thinking it would be like the debut which I thought was how a punk record should sound...cheap and fucked up.
As for Sabbath, they win out on the working class ladz front,,but they wish they had had the budget the Clash had for "Give Em Enough Rope"....i always wanted to re-mix Masters Of Reality and Vol 4....guitars not mixed high enough. 1st album was as cheap and fucked up as the Clash.
So i guess i would Choose the Sabs ,if they were remixed by me, as punk enough.
Will never forgive the Clash for Sandinista and London Calling or for being posh, except for Topper.