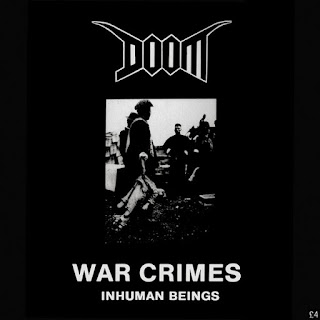 With the haunting image of a dead young woman probably reaped and murdered, lying in a street in Ukraine,and driven over by several Russian tanks operated by laughing Russian murderers lingering in my thoughts.One wonders what possible music from within the barricades of the rock idiom could encapsulate the horror and anger generated by these inhuman war crimes,and still be able to dance to it?
Of course I reached for Doom's debut, and cranked up the amps.
Yeah,it sounds like a crustier Discharge with different vocals,and i'm not too much of a fan of that Growly " Your Grandmother sucks cocks in Hell" vocal style so beloved of Grindcore, but......there's something relevant within the dark walls of this relentless high speed bludgeon that is the perfect accompaniment to this ,among many such evils perpetrated in the current Doom laden situation we find ourselves falling into.
This blog started during the Credit crunch,and flourished through the insane Pandemic voluntary imprisonment years,and both of these are still with us to some extent...especially the debt,debt slaves which we are.Now,we have a very real nuclear threat like it was the 80's again.....not a bad thing in someways?.....World leaders with the IQ's of a slug pushing a malformed idiot's philosophy,in the words of one slug brained idiot....the rise and rise of Semi-Fascism.
On top of all that,galloping inflation, and an energy debt crisis spiraling exponentially out of control,where energy Bills are close to being more than a living wage.Its expensive, but strangely they don't seem to be running out of the stuff....if you've got the dosh there's an unlimited supply apparently!?
Environmental change is forgotten as priorities turn towards obtaining enough food to eat,and we're burning our houses to keep ourselves warm again.As our delightful Russian chum's are burning off 10 million dollars of unsold methane gas into the atmosphere every day!?.....we've never had it so bad,and are catching up World War 2 fast.
Here's the best part....and it's gonna get worse!.....We're DOOOOMED!
(see what I did there?)

Gloom Side:
A1 Confusion (Intro)
A2 Life Lock
A3 Slave To Convention
A4 A Dream To Come True
A5 Drowning In The Mainstream
A6 Same Mind
A7 Relief
A8 After The Bomb
A9 Stop-Gap
A10 Scared
Shroom Side:
B1 Sick Joke
B2 Natural Abuse
B3 Exploitation
B4 Beat The Boss
B5 Money Drug
B6 Fear Of The Future
B7 No Religion
B8 Phobia For Change
B9 Multinationals
B10 Obscenity
B11 War Crimes
DOWNLOAD some more impending doom HERE!
Posted by Jonny Zchivago at 11:17

With the haunting image of a dead young woman probably reaped and murdered, lying in a street in Ukraine,and driven over by several Russian tanks operated by laughing Russian murderers lingering in my thoughts.

What a lying load of shite. You have to be a blooming idiot to spout this crap.

I think we all know who the anonymous idiot is.

Okay, i'll bite. Where's the lie? You think he's lying about thinking about it? Or that what he described is conceivable? Your comment is semantic cess. But at least you made me laugh.

As much as this pitiful secret guy would like Putin to put his willy, ball bag deep, up his botty, he has yet to realise that he himself is the 'lie'.
Unlike the many documented incidents of corpses lying in the street being deliberately flattened by soviet era tanks...which is the only thing they are good for.

it baffles me how the whole world only now has noticed what miserable pieces of shit the Russians are, (and have been for centuries)! Thanks for the great post. Also to anonymous, you think johnny just made this up? That's bananas.

Here's a random sentence I grabbed of the www: "By the 16th century, Baltic German dominance in Terra Mariana was increasingly challenged by other powers. Because of Latvia's strategic location and prosperous trading city of Riga, its territories were a frequent focal point for conflict and conquest by the Russian Empire.

They have been selfish violent dogs for centuries!

Indeed Kevin, in my opinion Russia should be isolated until they crawl back asking for forgivness.I mean the poor fuckers already missed out on the Jazz era,the fifties sixties and seventies....re-emerging in time for Rave Culture...poor sods.Now they're fucked again!?...for wot?
Although there's an argument that we should isolate them but let them have mylie cyrus and the entire autotuned modern culture of crap.....that threat alone would facilitate a complete withdrawal from Ukraine within days.

No offense but all those swastikas must have gone to your head, I think.
Say hello to that comedian cocain addict Hunter Biden friend

no offense but due to the lack of content in your comment i will have to label you a cross burning democracy reversing apologist of semi-fascism.
Hunter Biden is small fry when compared to a certain PeePee party tape controlled ex-president.

fuck me. the chode can't even spell cocaine. the fucker would put his hood on the wrong way around and never find his way out of the house. forward the revolution dick face.

not you jonny ... obviously, you're a dickhead.

btw, Doom are rather splendid.

Someone's being cheeky again!?.....Badgerstump, is that you?