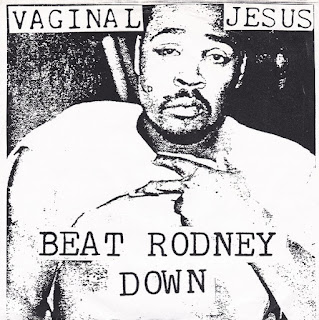 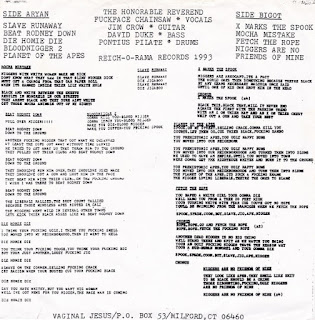 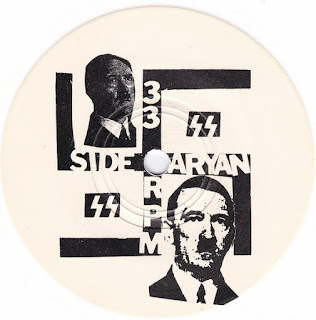 "Vaginal Jesus" wasn't that a hit for Depeche Mode?.....
Don't you just wish that DM sneakily released a tune like 'Bloodnigger',and all those pasty-faced lost generation types in the USA didn't realise its sophisticated angle on bigotry as a mirror approach? As in the Ironic Bigotry of this hatecore masterclass by the superbly named Vaginal Jesus.
It is understood that Seth Putnam of Anal Cunt was in Vaginal Jesus?.....I dunno what gave the rumour machine that impression?
I like a good  tasteless racist joke so i do, but it is certainly how you tell 'em that counts.
Of course there were stacks of Come Org records that plumbed the depths of good taste in the eighties,but that was 'Art' wasn't it? It never came close to recreating the knuckle dragging horror of actual real Racial prejudice. Now,this record is the closest I've ever heard to recreating the racial hatred of a KKK  Grand Wizard,without actually being one;so us confused white boys could understand.
Naturally, i could be reading far too much into this brutal sledgehammer of neanderthal driven Hate,but I figure that yer actual Bigot wouldn't want music, as civilisation crushing as this, anywhere near their fucking Churches.
These fuckers...racist Sasquatches all ....were running scared from Nirvana in 1993,so only their god knows what they would have made of a group with a singer/growler called The Honorable Reverend Fuckface Chainsaw,that existed in the same time frame as the woefully insipid Nirvana?
The trick, with Bad taste is that to understand good bad taste you have to have Good taste in order to recognise yer actual bad bad taste, and yer actual Good Bad taste.
I'm going out on a limb now by saying that Vaginal Jesus may well be Good bad taste......but, even if it isn't, I still like it...a lot. Who wouldn't want a record released with a Side Aryan and a Side Bigot on it?
Maybe without using your real name mind you...that's just asking for trouble;just ask The Honorable Reverend Fuckface Chainsaw.
There will,sadly, be person's,previously described as knuckle dragging Sasquatch fucking Neanderthals, who will be taking this record 100% literally.As they do with thar best-selling fiction book "The bible", which isn't surprising as its crammed full of lovely Elizabethan poetry,with lashings of  genocidal ,misogynistic, homophobic violence of the highest order. Just like yer average Anal Cunt record.
Tracklist:
Side Aryan:
A1 Slave Runaway 0:52
A2 Beat Rodney Down 2:17
A3 Die Homie Die 0:38
A4 Bloodnigger 2 0:12
A5 Planet Of The Apes 1:39
Side Bigot:
B1 X Marks The Spook 1:20
B2 Mocha Mistakes 1:29
B3 Fetch The Rope 2:21
B4 Niggers Are No Friends Of Mine 0:46
DOWNLOAD your contribution to racial harmony HERE!
Posted by Jonny Zchivago at 19:20

I haven't listened yet to see if I like this, but for me the intentions don't influence ultimately if I enjoy something...I'm addressing the "good bad vs. bad bad" issue. If a hideous and violent son of a gun makes something, I'll probably decide my enjoyment on whether I enjoy the music. People decide their own tolerance on what's acceptable. I often see/hear glowing quotes on philosophy and life from Burroughs (openly a pedophile, murderer), Bukowski ("wife" beater non functioning alcoholic), h thomas (violent, drug addled, woman beater, child abuse etcetc)....so you know, circumstances only go so far I reckon. Thanks for the post!

Kevin...you just can't beat,as in better, a violent, drug addled, woman beater for their insights into human depravity. Being normal on the scale of human decency I cannot comprehend abusing children unless its put into rhyme and song......that's how dumb i...er...we(?)....are.

I think I did seminary with Rev.Fuckface. All us niggarz held him in high regard. It was obvious even then he had quite a future ahead of him. Perhaps he and his pals can protect future inmate tr*mp from all those big scary black men who have a special taste for fat soft privileged white meat and prefer theirs extra tender and wiggly.

This is almost as edgy as working for the Feds on the 6th January last year.