EyeHateGod – "In The Name Of Suffering"(Intellectual Convulsion – SPASM 3) 1990 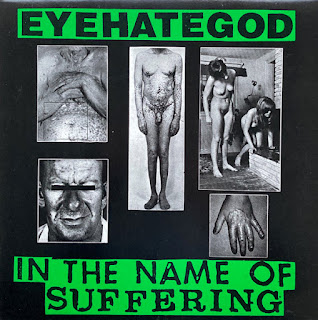 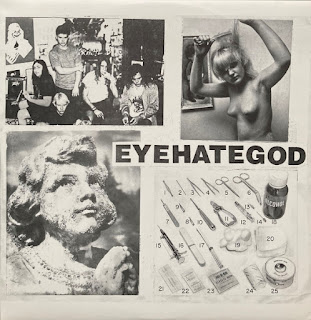 With artwork like it was plucked out of a British Medical Journal from the fifties, 'Misanthropic' is a popular adjective used once confronted with the works of surly sludge metal protagonists 'Eyehategod'.
Of course, with a band name such as this they had little chance of releasing an LP with the American Taliban in town.So their debut album had to be unleashed in a free,more secular state.....i was tempted to say Iran,but....In this case it's that much maligned paragon of freedom....France? Where some dumbass teacher caught displaying a crucifix on a chain can risk being booted out of the building and sacked on the spot.Way to go France!
The land(USA) that generously gave the world Rock and Roll.....nooo it wasn't God,Argent(!).....had to wait three years before this wholesome bi-product of that great land was easily available for the intelligent 19% to annoy their indoctrinated fellow citizens,or, the 81% of Americans who still believe stone-age superstitions in the 21st century.
Naturally, some Charlie Manson soundbites inevitably crop up, who seems to be some kind of God to sludge metalers everywhere, or,in the words of the creepy hippie himself...the Son of Man.
The music is Sloooooow,brutal, and refreshingly lacking in Metal cliché with more emphasis on the Doom rather than Satan worship. Although the very word Eyehategod tends to suggest a belief in the hereafter.Presumably If you can 'Hate a God', that means there's probably a devil character too,or maybe they represent the same entity?
There's little mention of a Devil in the Bible (File under Fiction),but what there is of their God is beyond Horrific,maybe even Evil? This could be why Christian Metal is so frightening....or is that because it's just frighteningly CRAP!
1 Depress
2 Man Is Too Ignorant To Exist
3 Shinobi
4 Pigs
5 Run It Into The Ground
6 Godsong
7 Children Of God
8 Left To Starve
9 Hostility Dose
10 Hit A Girl
DOWNLOAD in the name of suffering HERE!

Many thanks. I don't know who writes the liner notes, but that individual is intelligent and extremely funny. Peace.