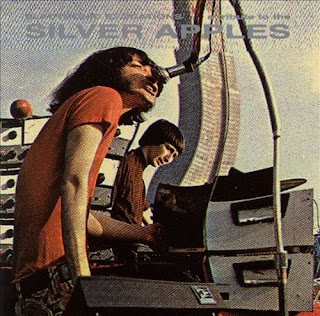 This is the album that restarted it all. Simeon Coxe was flicking through the CD's in Tower records and came across this tribute to his former band in the various electronic section.Refreshingly not getting upset that someone was releasing versions of his tunes without asking him.He contacted Enraptured and congratulated them,and expressed a desire to get back into music again.
In fact, unknown to Coxe, a german label had been selling bootleg copies of the first two Silver Apples albums for years,helping grow the legend.No spiteful where's the money gone rants,just gratitude that someone had taken the time to spread the appreciation of the Apples work far and wide......some other 'Artists',and money driven bourgois reissue labels should show the same appreciative qualities when comes to the Music Blogs, who have done a Silver Apples for many a rediscovered musician,or buried record labels (eg Vanity records).
Here we have the cream of 1990's UK Indie neo-psych drone meisters,plus Windy and Carl,and Outrageous Cherry,whom i saw in New York and the female bass player was playing unplugged for at least two songs before someone else in the band noticed. Of note is that Scouts of Uzbekistan member, Mark Carolan, is drumming and programming for Alphastone's version of "You're Not Foolin' Me".
Ahaaa, Alphastone, as led by the 'other one' from Spaceman 3,I suppose, Spoaceman number 3, Pete Bassman,which had one of those extraneous members in the group, like Bez,or Chas Smash, who appeared to do nothing.They alway had to have a silly name too, and this one was called 'Digger'...he played some inaudible Conga's,but clearly thought he was Mozart.The only thing he had in common with Mozart however, was that he was an arsehole too. Naturally, constantly stoned off his face like he thought a proper musician should be, Digger had a problem with me and my entourage invading the backstage area to meet Simeon,and drink all the beer;Alphastone were supporting the Xian Hawkins era Apples,who weren't very good. Upon referring to their 'new' drummer, who had replaced the Scouts' Mark Carolan on the drum stool, as 'The New Drummer','Digger' insisted on saying 'Thee Drummer' with increasing aggression until everyone realised that he was indeed 'Superfluous', like the Paul Rutherford of UK neo-psych that he was.Couldn't hear his bongo's for love nor money,and i suspect he had a digeridoo stashed somewhere on his person too. The Silver Apples were better at their next Leicester gig a year later(where I posed as an Observer rock critic),with the original Dan Taylor on skins....now he was 'Thee Drummer', and thankfully, No Digger in sight.I think Windy and Carl supported this time...a vast improvement.
This compilation, However, is brilliant....maybe even better than the Silver Apples' records?...or is that blasphemy?

A bunch of utterly forgettable, meaningless, boring groups doing versions of songs by a group who, while interesting, were also very, very overrated themselves.

Thanks so much for this post. I have the original 10'' (even not the same cover we see on Discogs, mine is orange). I didn't know there was an extended CD version of this.

@you mean old bastard....you mean ol' Bastard you....and now stun us with examples of what you think is "good".....not that i disagree with you but its always fun to hear nay sayer solutions.

Countering with "something good" would serve no purpose and is not the point in a case like this. The point is to loudly point at, laugh at, and mock the people who are demonstrating their (unwitting and not really fully comprehended even if it was witting) belief in Mr. Cage's "I have nothing to say and I am saying it" credo.

But, that also doesn't mean you can't like or make this shit. You can like and make whatever you want. I have no argument to make and I am not making it. Just the facts, ma'am.

mean ol ba'staard.....your wordy and well researched sidestep is accepted,but.....awww go on tell us what you like so we can mock it!
Sorry....grubs up!

Well, lately it's been a mix of Z'ev (or more specifically, the UNS stuff), early Philip Glass and more recent Pet Shop Boys. But I also got a pile of ECM and CTI stuff in the hopper, along with some Vanilla Fudge, Tim Buckley and Eyeless In Gaza. A boatload of early Schnitzler/Eruption stuff I keep shoving to back of the list. And oh so much else. I am resplendent in divergence. (As someone once said...)

And yes - that was all quite insufferable to air out like that. But you did ask, good sir.

Stashed didgeridoos are a menace to mankind. There must be some in North Korea
in case everything else fails.

"Stashed didgeridoos are a menace to mankind."

That's what Rolf Harris said. Er, I mean, did.