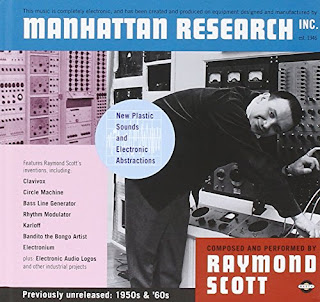 Whereas one ,rather more famous, Manhatten Project became the Destroyer of Worlds.
There was another that became the Creator Of Worlds,in fact the creator of the synth.This one was run by Raymond Scott,who spent his time stretching the limits of modern 1950's science to make something positive for the future of mankind,rather than its destruction.Although some of the music his research and innovation went on to enable its existence by,would make any sane man choose nuclear annihilation rather than have this torture inflicted upon them.
From around 1949 onwards,former Big Band Jazzer Raymond, spent most all of his time inventing early synth's like the "Electronium", and the "Clavinox",which was a keyboard controlled Theremin,and the "Karloff",an early sampler. Naturally he used all this gear in his wacky music,which can be heard in most decent american cartoons up to and including ,in my opinion, The best TV series ever made, "The Ren and Stimpy Show".
This posthumous release of unreleased works discovered at his home, showcases Scott's pioneering electronics from the 1950s and 1960s with his futuristic electronic compositions mainly used in television and radio commercials and for the burgeoning market for novelty records of electronic music.He was highly prolific in all areas of early electronic music it seems.

So that's why he was forgotten?
Tracklist:

DOWNLOAD the only manhatten research project worth remembering HERE!
Posted by Jonny Zchivago at 10:21

A lot of people that get "dug up" in these modern times tend to suffer from not really being as good the subsequent enlightened hipster dribbling makes them out to be. (See some of the posts here over the last few weeks...)

But in Raymond's case, I think the opposite may be true. I think the real genius of a lot of this stuff is still flying over most people's heads. And possibly always will. It may be he was just too - as Dizzy Gillespie once said of Miles - "hooked out in front" for anybody to really get it.

I'm not saying it's the greatest stuff ever recorded. But for time and place - it's pretty damn impressive.

Hi An Historian Opines...don't get to say that everyday.
Although this stuff isn't 'flying over your head', I'm sure everyone feels the same. Of all the posts I have done in this bracket, this is probably the most un-remarkable. Strictly Novelty,and pandering to capitalist whims.
His main claim to fame has to be his devices.The music is a bit shit, but still with heap loads of Kitch factor...and thats what I like in my background music.
I suppose one had to be there at the time.

You're merely proving my point here. Pandering to capitalist whims? Not so sure about that. He did what he had to do to pay the bills - but he sure as hell didn't get rich from it. It's also worth remembering that nobody paid that much attention to him at the time. And frankly, after the brief little blip when this and the baby records got reissued, he pretty much disappeared again. That sequel to this a few years ago came and went in the blink of an eye, as far as I could see, with very little notice at all.

When things like that happen - that's a sign of underlying quality. Which has a far more limited shelf life, hipster-ically speaking, than kitsch factor.

At this point, I'm saying the odds of anybody being around - or if they are around, having any time at all for this kind of thing - 100 years from now is slim. But if they are, and if they do - they're gonna find way more in this than they will in Gershon Kingsley and the like.

Oh no Anonymous...i think this happens if i happen to be palying,or have played the track inquestion when i make the RAR file!....i'll upload it sepeartly and plonk a link on the track in the track list.

Hey, thanks, Jonny, for the future fix/upload of track 1-11; much obliged!