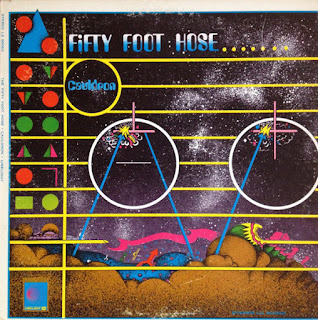 Unwitting rivals with the Silver Apples,and the United States Of America for the Electronic Rock pioneer throne was the rather trad Psych sounding Fifty Foot Hose. They still had guitars involved, and had a Grace Slick-a-like as singer; but, crucially a bloke on oscillator, and the guitarist doubled up on Ring Modulator,so we're getting into pre-synthesizer early Electronic territory here.
Inevitably getting lost in the bowel movement of Psych bands from San Francisco in 1967/8 their album became an influential cult classic. Pere Ubu being an obvious beneficiary.
Well, I'd sooner listen to this stuff than The Grateful fucking Dead, in fact i'd sooner listen to Mylie Cyrus than the Grateful Fucking Dead,even though Cyrus is a sexual propaganda-bot for the old world order, in fact I'd prefer anything to another adult orientated psychedelic guitar solo from Jerry Garcia!
Fifty Foot Hose had all the ingredients to have made it to number 154 in the billboard charts, but those weird noises put off the rock crowd and they bombed.Which probably saved them from eventually making their own version of "They Built This City On Rock'n'Roll", like what happened to Jefferson Airplane......stay off the drugs kids.
For artistic integrity to remain intact,the best thing that can happen to you is Failure, or Death.But if you're gonna fail, better make it a glorious failure, like this album,and the Silver Apples' albums;or a glorious death like Jimi Hendrix, who died just as he was starting to suck real baaaad.Like all music,timing is the most important aspect of one's art;but, if you want suck-cess,all you gotta do is turn up consistantly.They'll like anything if you're reliable,repeat yourself constantly, and most important,make sure you're there.No matter what your music is like,don't break up and you'll make it.If Fifty Foot Hose had continued they'd have been as big as The Residents are today,as in 'not very'.And if you broke up,and wanna reform 20 years later with no original members left, that's a surefire way of earning some quick cash....just,please, don't make a new record!? As in football, you have to maintain momentum.The magic is lost the moment a group decides they have musical differences,or the drummer wants to make a solo album.There are NO exceptions!(discuss).

DOWNLOAD later if not this time HERE!
Posted by Jonny Zchivago at 09:03

This I like very much. I can also recommend their 1967 7" single "Skins", especially the flipside "Bad Trip", then still under the moniker The Ethix.

About your comment: "The magic is lost the moment a group decides they have musical differences,or the drummer wants to make a solo album.There are NO exceptions!(discuss)."

I think the exceptions lie with the bands that have a very strong leader with a vision so that it hardly matters who the other guys are (if musically capable). Examples: The Fall, King Crimson, Shock Therapy, Pere Ubu.

I use "We Built This City" as a tool in any anti-drug talk
I spew.

Alan White's solo album was called "Ramshackled".
On the inner sleeve was this quote, I think from Dylan Thomas: "And the ramshackled sea exalted thus...", which always killed me, but I actually like randomly-named albums. My new album's called "Softly". You know, like in that Yeats poem: “Tread softly because you tread on my dreams”!
Was it better than Peter Criss's solo album? Yes. It was thicker.

Wolfie, Skins and two versions of Bad Trip are on this file! You weren't paying attention!?...yes this is the expanded version! I don't have the original because this isn't a record collector site, as some people seem to think it is....not you of course Wolfgang,just saying.

Well, as for losing the "Magic", for me The Fall lost their magic after the first fez line-ups split up.Agter Live At The Witch Trials, it was never the same. Also never actually officially splitting up,and just continually adding replcements doesn't count as staying together.
That also applies to Pere Ubu, who aren't very good nowadays,just Thomas and backing band,like the Fall post 1979 was MES and backing band.
King Crimson,is an interesting one,as most people can't stand anything post Discipline, and i understand why.....Fripp and backing band trying too hard to be abstract;), I do like the discipline era band however, in the same way I like Wings......as for Shock Therapy......who???????...but i bet the magic was indeed lost.

@notthfieldhat.....Starship are a failsafe anti-drugs angle that could save many lives....but great to sing along to and dance to in that Bruce Springsteen "Dancing In The Dark" way....all together now... we built this shithole on Rock'n'Rooooolllllll.
Fuckin hell, you couldn't make this up...unless you were on drugs that is.

Well, Myley Cyrus never had dozens of punters dancing naked on acid and probably her musicians won't survive as long as the Dead doing their trick.
Put a gun on my neck. Cyrus or the Dead? If Cyrus is the future please do your job and make sure you kill me twice so I can join the Dead,
Great stuff you post. Stay alive.

I had the good fortune to attend Terrastock 2 in San Francisco. Not only did the three piece Silver Apples perform, but Corky Marcheschi brought his new lineup of Fifty Foot Hose-- drums, bass, guitar, girl singer, Marcheschi's weird assortment of homebrew circuitry, and another guy with his own collection of artifacts-- I vaguely remember a tall scepter-like pole with coils and flashing lights. They did a few of the songs from this album, of course, and a new song about flying saucers, and a bunch of what sounded to me like improvisations. They had a new CD, which I bought because it had the flying saucer song on it. I found them more substantial than Silver Apples.

You are right, I did not pay attention enough to see the single was on there. But maybe someone liked the info about their earlier name?

As for that other subject I am not going to argue with you because you have good arguments and my knowledge (and English) might not be good enough. 8-|