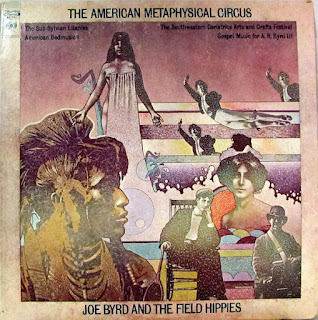 After the fine 'United States Of America' project bombed,probably dropped over Cambodia by their bastard of a record company,and kept all the royalties to themselves President of The United States...the band...Joe Byrd, made a similar record,using lots of effects,and a smattering of electronics, named after a USA track,"The American Metaphysical Circus". As political as ever, Byrd unwittingly predicted the Trump years, and their impending end, in the "Four Dreams For A Departing President" section.After Trump could only attract 6224 Morons to a rally in Tulsa,capacity 19000,after he had boasted there were a million applications for tickets only last week on twitter....titter titter.
This bunch of studio bound 'Field Hippies',manage to have made a kind of off broadway Hippie Musical,in the terrible tradition of Godspell,and similar,but blended with the 'United States Of America' album part two.
When i tell you that Joe Byrd received Stanford University's Sollnit Fellowship for graduate study in composition. But chose to 'split' for New York, where he worked as conductor, arranger, teacher, Associate Producer for a record company!???...then that'll go someway to explain why this sounds like a bunch of young 'talented' kids who passed an audition to get in the band.It's an academic's idea of what's cool.It sounds so composed,that it could easily be mistaken for one of those terrible age of aquarius musicals that eventually gave us Andrew Lloyd Webber,and the age of Musical Theatre that has compleatly taken over the worlds' theatres.
Again, there's some of those 'ragtime' moments that Psychedelic America found utterly hilarious,but makes any european wanna smash their record players.
After this I guess Byrd went back to his day job arranging pop hits to sound like James Last.....Phil Ochs accepted....yeah I read the comments section......The Byrd had flown.

DOWNLOAD for a departing president HERE!
Posted by Jonny Zchivago at 23:04

This record here, I like the first three tunes. Obviously "Kalyani" is "Come Out" done backwards, by which I mean that the tape loops come *into* phase, which is the cue for the next song to start. And "Moonsong: Pelog" uses a non-Western scale, one of the Javanese gamelan modes. The rest of it sounds like the band's musical director was known as "Pot," which in fact he was.

Hello, incidentally this LP is featured in the list of favourite music that Genesis Breyer P-Orridge provided in the quietus online music magazine a few years agao and was refeatured at the weekend of his /her death in may.I Haven't known it yet but will now,thanks to your kind shareability...
Since i am of the rare species (in the western world) without internet at home , i was out of touch with the blogosphere during the Covid19 lockdown and only now can use free wifi again, it was out of reach, when all the cafes and bars had to be closed and my only access was at some friend's home sometime.So i try to eat backwards through all the posts of the differnt blogs since middle of march.

The USA disbanded shortly after the album came out because the bass player got busted for possession of LSD, mid-Tour. Scuttlebutt has it that Byrd was a total dick to work with, so when the bass player got busted and the tour abruptly ended and then the album was downplayed because of the arrest, everyone was like - "Fine Joe - go find some other chumps to play with - we're done."

One weird fact towards the Field Hippies:
It's the only rock music album on Columbia Masterworks, which was normally for Classical Music. So, when the truck arrives with albums the high school student working at Sam Goodys or some similar vinyl emporium at the time saw the record, saw it was Masterworks and filed it in the classical section. So, all the long hairs couldn't find it. And then what ever classical music dork chanced a fiver on this thing quickly returned it. Freakin' disaster...