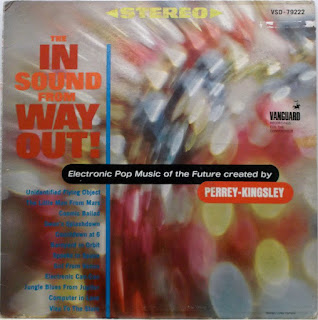 From the 'Stereolab' (now where have we heard that before?) of  Gershon Kingsley and Jean-Jacques Perrey....fine american names both.....we bring you "The In Sound From Way Out!";probably one of the top ten album titles of alllll time. It even got used twice when The Beastie Boys brought out an album with the same name,same cover, but far far shitter music inside.
Using all those avant garde Musique Concréte techniques made famous by lofty com-poseurs like Pierre Schaeffer nigh-on twenty years previously.Perrey and Kingsley did the american thing and made the silliest music possible with kilometres of magnetic tape and a razor blade.I say 'silly', but if some French bloke fresh out of the Conservatoire de Musique made this in 1952,it would still be hailed as a ground breaking work of art-sonique to this day.
Instead it's filed in the Novelty section as a rediscovered piece of cheese to break the ice at your soirée...in fact exactly what it was created for in 1966.Forget History and we're doomed to repeat it.....oh shit,was that my right wing ignorance and a reference to Statue toppeling again??? In which case I don't apologize.

DOWNLOAD the out sound from way inside HERE!
Posted by Jonny Zchivago at 09:41

Also "Swan's Splashdown" is "Walking on the Sun".

Statue toppling.... I fucking hate statue toppling! I like what they did in Budapest after the Soviet empire toppled, they took all those communist era statues and put them all in a beautiful park:

In some ways I can understand it, all the pent up anger, in-equality, corona and being a Millennial with no future in sight ( worse that it was when we were them back in the 70's and 80's) and I'm all for battling cops and burning down banks, but statue toppling, destroying small businesses etc., nah man....

Like the sculpture park idea. We can replace these arseholes with statues of ordinary people, and that includes no statues of Mandela,Macolm X and MLK...the three M's.
I got no time for other peoples lunchtime revolutions.

statues of moe, larry and curly. with shemp on the side.

Statues belong in museums, what's so hard about that? You are pretty cool for being a right-winger, and judging by what you share with the world, I don't want you to change one bit. I wouldn't want to upset the apple cart, now would I? Through your research and info sharing, you are of great worth to all of us, regardless of political affiliation. Cheers! And Thanks for sharing both sound and knowledge.

@echopk...what have you got against right wingers?.....Trump isn't right wing he's just a TWAT!....and his followers are just Morons.
Even the Nazi party had a cool faction, Gregor Strasser....who liked Jews,treid to remove anti-semitism from Nazi Policy,but had to escape to canada during the Night of the Long Knives. I'm not Right wing...thats Capitalism on the 3D political spectrum...Hitler had social programs(not pograms), Obama-care....Hitler-Care...whats the difference?
I had a month long argument in these comments sections with some Tea Party member about freedom,and how Hitler was Left wing, and I have to say HE WON!
Its not black and white.....even the racism arguments isn't black and white. I find that most of these lunchtime socialists are despicable hypocrites,as much so as the dumbass KKK bastards are. If I had my way.....etc.....who fucking cares.....we get what we deserve, and america certainly deserved TRUMP....me?...I'm a Nihilist, fuck your system.....never voted...why? Prople died for my right to not vote......statites of real people please....maybe perrey and kingsley to replace General Grant or whoever...no war shit anyway.

thank you for to say it