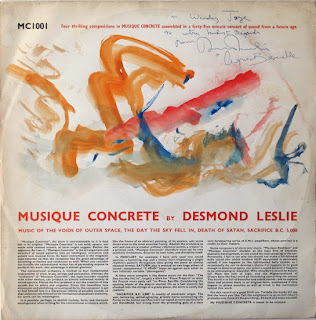 Apart from inventing the multitrack mixing desk and being a close relation of Winston Churchill, World War Two Spitfire pilot Desmond Leslie, developed an interest in musique Concréte and electronic music shortly after the war had ended. He had his own little recording studio, and proceeded to make these sinister pieces of early electronic music, which found their way onto the soundtracks of a few terrible British Science Fiction movies, and even some early Dr Who soundtracks.
Leslie was probably most famous for punching theatre critic Bernard Levin in front of eleven million viewers during an edition of the live satirical TV show That Was The Week That Was in 1962. Ostensibly this was to protect the honour of his then-wife, Agnes Bernelle, in response to Levin's critical review of her show, Savagery and Delight.Levin was asking for it if you ask me....god knows what Bernie would have said about this....er...music?Or any of Leslie's science fiction novels and screeplays?

Hopefully, we will all get over that punch one day and laud Leslie for his remarkable achievements with music technology and his fantastically weird and forward looking music.

DOWNLOAD and fill your void HERE!
Posted by Jonny Zchivago at 21:27

Am really loving your series on early electronics from the UK, but am shocked, yes, shocked, that you missed reference to Desmond Leslie's vital role as co-author with the one and only George Adamski of Flying Saucers Have Landed, an essential text of extreme ufology.

If you're going - like a fart - in this general direction (and not fussed about staying strictly UK centric), I have four words : Karel Appel. Musique Barbare. That shit'll strip the paint off the walls, if you have any upcoming redecoration plans around the house.

Dear Anonymous ,I am sorry i didn't mention his Ufology books,but i just felt my write up was too conventionally fact based....surly you know i don' like too much of thqt stuff.....but yeah, the flying saucers have landed, great stuff. Benard Levin only referred to Leslie qfter the assault as a "Ufologist"

Thanks for this. I just found out about this album because i am interested in ufology for many years. I am also electronic music fan and in recent years i am trying to grab any weird / important / classic (often forgotten) album from the early decades of electronic music. I am also (like that other anonymous) very surprised that you didn't mentioned about his ufology past. Maybe it's just us "ufo freaks" :)