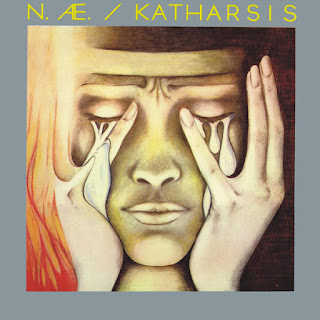 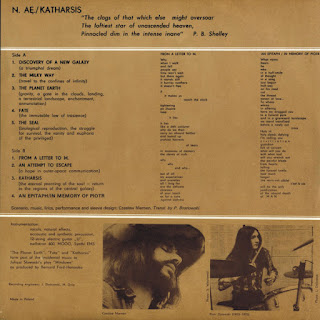 Czeslaw Niemen is hardly obscure in his native Poland,unlike anywhere else outside of the soviet bloc. In fact he's a star there. Actually I should be saying "was" since he kicked the proverbial 'bucket' and left to sing with the choir invisible in 2004. There's even a bust of him in a park somewhere in Poland and even Czeslaw Niemen commemorative coins were minted....a rare honour indeed.

N.Æ. was mainly his fusion-oriented project, but this second release under that moniker,also on the Polish State label, was essentially a Czeslaw Niemen solo album with no outside help.Now he could really indulge himself with his own genius without other musicians muddying the waters.Mike Oldfield Style, but without the tunes or dubious humour. This one veers much dangerously closer to the avant garde rocks. Lots of spacy Minimoog and EMS Synthi A.Plus some of the more raw, in your face, Mellotron ever commited to low grade communist era plastic.
Its always a sign,especially in the seventies when we didn't know any better, that a 'Rock Star' is begining to believe his own godlike status, when they quote 19th century romantic poetry on the rear of the jacket.You know you're in even deeper trouble when every track has sub-titles in brackets,to show how much more intelligent our new God is than you are.
Never seen without a hat,I wonder if his Soul really did 'Return To The Regions Of The Central Galaxy', as the sub-title of the title track suggests it was tearning for?

A1 Discovery Of A New Galaxy (A Triumphal Dream)
A2 The Milky Way (Travel To The Confines Of Infinity)
A3 The Planet Earth (Gravity, A Gate In The Clouds, Landing, A Terrestrial Landscape, Enchantment, Annunciation)
A4 Fate (The Immutable Law Of Trasience)
A5 The Seal (Biological Reproduction, The Struggle For Survival, The Vanity And Euphoria Of The Privileged)
B1 From A Letter To M
B2 An Attempt To Escape (A Hope In Outer-Space Communication)
B3 Katharsis (The Eternal Yearning Of The Soul - Return To The Regions Of The Central Galaxy)
B4 An Epitaph/In Memory Of Piotr

DOWNLOAD some katharsis for pretentious intelligentsia HERE!
Posted by Jonny Zchivago at 13:10

This!! thanks so much.........I love that the first song is the one he chose to impress us with what was in store for us!!! Truly eccentric