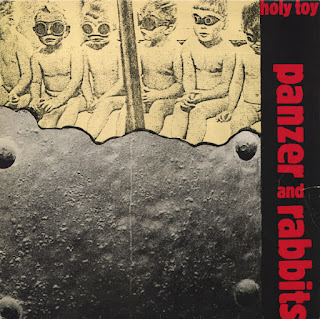 Things were getting shitter for pop music in 1984, but not Holy Toy.This is their best album I reckon. I like a nice piece of Riveted amour plating,of which there is plenty in the artwork. I also like Andrej's mister bean in a gulag vocals, and the oppressive soviet bloc production.
Hopefully the oncoming five years of right wing tory depression will result in the UK producing some new music to match this manifestation of frustration and hopelessness. \\\\\the \bright people will be defecting from England (Scotland will be independant), to Poland, rather than the otherway around as it was in the Cold war.....but I could be wrong, there is a slim chance that the British electorate will see the truth before polling day. The main reason for the foreigner hating scumbags of the working class,and the naturally racist middle class ignoramus's to vote Brexit was the obvious prescence of lots of Polish people 'stealing our jobs'.You know ,the ones doing the shitty jobs the lazy fat and feckless Brexit voters can't be arsed to get out of their mobility scooters to do....they'll have to once freedom of movement is removed.......key word is 'Freedom'.I resent being stripped of my European Citizenship, and I ain't alone,and we ain't going anywhere...especially now our right to live somewhere else has been stolen. (luckily I got out before,but you know what I mean?)
ps
No, not all Brexiteers are Racists, but the ones who are, voted 'Brexshit',no doubt about it.

DOWNLOAD the cold wind of holy toy HERE!
Posted by Jonny Zchivago at 21:10

stick to the music,grow up and accept people have different opinions to you. From a working class SCumbag,bet you dont publish this.

Mr suitably Anonymous....Opinions are fine, but when your nationalist opinions affect the lives of others they become something that should be, very, stopped.
Not all Brexiteers are Racist,or shirking Class Scumbags,no,but every 'Racist' and 'scumbag' voted Brexit.
If you wanna stick to the music go away, start your own blog and accept that people have different opinions to you.
Notice that there is a difference between 'Working Class Scumbag' and 'Working Class'....interesting to see you have put yourself in the former camp.

Thanks for the continued stream of interesting items.

Yep Fanny, that just about sums me up, crossed with a bit of Nihilism.

I'm an outsider, but from what I've gathered, Brexit is every bit as racist and toxic as Trumpism. I kinda struggle with the notion that, somehow, not _all_ Trump voters are racist, misogynist sociopaths. It seems that if such persons do, in fact, exist, they're gotta be simply incomprehensibly ignorant. I mean... just, how?

And the idea of keeping politics out of music? Beyond preposterous. All arts, for that matter. To the best of my reckoning, the only field in which fascistic, right-wingers have _ever_ produced anything that could even remotely be considered "good" is poetry. Strangely, a fair number of decent poets were fascists. But music, film, comedy, all visual arts? Ridiculous.

Yep, totally agree.
Anyone who thinks that anti-foreign reasoning didn't come into play at all and voted Brexit, is kidding themselves. They can hide behind these economic fantasises and stories about how the evil EU makes us buy straight bananas, but the basic fact is that they don't want that Polish chap living next door.
the "I'm Not Racist.....BUT" crowd, who couldn't name a single law that the EU has forced on us.All law is agreed by the sovereign UK Parliament. We've been mugged by right wing think tanks.....as have the USA with Trump, plus god is added to the volatile mixture. At least Brexiteers are not stupid enough to believe its Gods will.

It *is* God's will! A guy who sells pillows says so!
https://friendlyatheist.patheos.com/2019/02/28/my-pillow-guy-at-cpac-donald-trump-is-the-best-because-he-was-chosen-by-god/

And somehow Trump's personal flaws--you know, being a serial rapist and whatnots--somehow strengthens their conviction that he is "the chosen one." Idiots.

You do all realize this is just the cycle as it goes yes? It's the right's turn now to slump in the heart's of the twinkly left. Just as the baby dicked tighty whiteys suffered through the DY-NO-MITE! years before. Anyways politics in music is fine if you are as boring as dry shit caked on a shovel! Also it never ages well. Look at all the stupid anti-bush punk stuff that came out back when. Cringe mother fuckers! Anyways the worst part of this is that any of us think we are making a bit of difference to any of it tucked safely behind our computers. Politics are trite. Everyone hates you when you bring them up too. I'm talking to everyone right now. With exception of Jonny as he get's a pass because he at least a funny fucker with it and his stupid opinion only matters as it comes with a prize inside the zip folder! Yip skip and see you in hell. He he. Anonymous is a pussy too that lazy sod. Sign in to your pooter like a real man you simple gimp fuck boy! And will you and your cheesy parmesan friend sarah lee or whatever (the one with the tits!) take it beyond the comment zone outside this vicinity already please as im getting sick off the fumes rising from your very agreeable tonnage. Soft cooing and googly eye bullshit going down lately. Or maybe im just a jelly filled twinkie idk really. I am still in deliberation! Anyways all parties suck, show me one leader who isn't a terrible person (like any of us know them personally ever!), left hands right hands bald heads, soft soles, waxed bikini areas, hairy tangled asshole pubes greedily clinging to the dingles like they weren't ever to be shit upon again! It does not matter. The worst it all gets the more we are just getting what we all deserve. Now put on your Skrewdriver albums chased with some NWA my nuhs cuze the music transcends all the human rubbish in the end. Lyrics are stupid. Never read them. If you got to buy a book of fascist poets like old cow lee said up top there while she was gumming the beast. Okay then. Hey Jonny i bet you don't publish this! oh yeah! Yeah! Watch me then! Oi... and the world still turns... into the big pile of shit we have been gearing towards since well whenever the aliens dropped us off. That's right. Humans are the unwanted scourge of the universe can you believe it even! CAN YOU JONNY!? ANSWER ME!!!!!