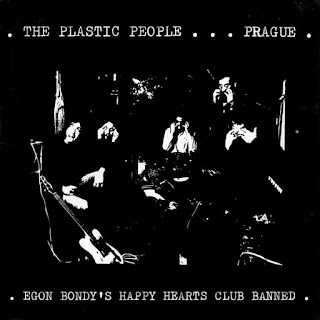 In comparison to the toytown rebellion of the Sex Pistols in the UK, The Plastic People Of The universe was the real deal.In 1976 the PPU were arrested and put on trial by the communist government to make an example of these smelly hippies.They were convicted of "organized disturbance of the peace",which i guess is correct(?), and sentenced to terms in prison ranging from 8 to 18 months.
I remember that promotional Julian 'I was privately educated' Temple's super-8 movie of the Pistols on Richard 'I was also privately educated' Bransons Boat on the Thames on the Queens Jubilee day.During which we see and hear a pre-addict Sid Vicious being a very shy and clearly well-spoken nice young man, with the obviously staged part of Malcolm Maclaren being 'arrested'...not....and Steve Jones' voice overdubbed after the fact, emphasing the point with a badly acted "They've arrested Malcolm,They've Arrested Malcolm!"....shock horror yawn!
Well the Czech police arrested everyone and anyone to do with the Czech underground music scene, and didn't let them go until they'd done some hard labour either! Like the Pistols, however, they were also banned from playing live,and had to do their concerts in secret. Nothing about their Zappa influenced compositions was particularly 'Political', and insisted that all they wanted to do was play their music;but their bohemian  lifestyles went directly against government philosophy,so they had to go.
This just forced the burgeoning Czech music scene very underground.....will "They" never learn?
In 1974, thousands of students traveled from Prague to the town of České Budějovice(you all know where that is of course?) for a PPU performance. Stopped by police, they were sent back to Prague in, alarming nazi-style, cattle trucks, and many were arrested. The band was forced underground until the Velvet Revolution of 1989. Unable to perform openly, an entire underground cultural movement formed around the band during the 1970s,and this album was eventually released in the west after being smuggled out to France in 1978.

The Music???
Well, if that actually matters, it sounds like a lo-fi Mothers Of Invention album of out-takes. Which ,I guess, is good.....?

DOWNLOAD the very real people of Czechoslavakia HERE!
Posted by Jonny Zchivago at 10:58

There was a question period with members of Yes in the 2000's and someone asked, "yeah, what was the deal with the capes?". Chris Squire snickered something self-deprecating and everyone chuckled sympathetically. But, listening to the more recent music...Put the capes back on.

A really fine modern band making cassettes is Zacht Automaat. The leader's artist girlfriend has made him a cape
proudly modelled on Zacht's blog.

This is a must. Love your thoughts on it.

I still have this album and the beautiful book that came with it, had to look HARD for it back in the 80's....

A classic that I often return to. Thanx for sharing!

Apart from the fact that 'Yes' should have been called 'No',if they had stuck with the cape then the world would have gazed down upon them with greater sympathy.
They should have stopped after Bruford left for superior pastures.A cape can obscure any number of sins.....as for Toga,s,.... if Hitler had worn a designer Toga we'd all be speaking German now!

One of the coolest things I ever did: I played bass in a "post-rock" band (yeah, we hated that appellation) called Cul de Sac for a couple years. During my stint we did a gig at the Knitting Factory, opening for Plastic People on what turned out to be their last tour of America. One of our tunes was this semi-structured jam in D minor, and as it was winding down I started playing the bass line from "Magicke Noci." Bassist Milan Hlavsa heard it, looked down from the balcony, and gave me a thumbs up and a big smile. (Oh, and our regular drummer couldn't make that gig, and we had to borrow theirs.)

Yeah i remember Cul De Sac....were you on the album they/you did with Damo Suzuki? You crazy post-rocker guys mixed with the stars it seems.
Must have been before 2001, cus Hlavsa was dead after that date.
I like any appellation that is prefixed by 'Post'...or 'Proto'.In fact i like any Rock genre or non-genre that starts with a 'P'....Punk/Psychedelic/Progressive/Proto....and yes...'Post'.
Its no coincidence that Plastic People starts with a 'P' too.

No, goldurnit, I didn't get to play with Damo. I was the second of their four bass players, and I'm on "Crashes to Light, Minutes to Its Fall" and the live "Immortality Lessons." During my tenure we also played the second Terrastock Festival in San Francisco, where we shared the bill with psychedelic progenitors Silver Apples, and Tom Rapp of Pearls Before Swine (who invited Robin to sit in on one number). And another band I was in got to open for Nik Turner, and yet another band opened for Daevid Allen. Those are my brushes with greatness :-)

I did get to interview Simeon of the Silver Apples around 2000.I said me and my photographer were from the Observer. It was for a student fanzine really Titter Titter. He and hid drummer seemed excited at the prospect of a uk broadsheet being interested in them. So we got to drink all their beer backstage, and mull over a drunken plot to steal Windy and Carl's roland sh-09.Which was foiled by the inoppertune reappearance of Windy. Ahhh...windy 'we're from the Observer....etc. Had a beer with Daevid Allen at the same venue funnily enough.....didn't try the Observer line that time.
But like you,No encounter with Damo Suzuki yet!
Although me as Thee Mark Chapman Experience did a 70th birthday tribute for Nik Turner, which you can see here:
https://youtu.be/Vc4EmF2cBAM

I don't even know who Pearls Before Swine are?

The first-ever English-language about the Plastic People of the Universe - their incredible history and their equally amazing music - is now available on ebay and via www.tomhull.com/ocston/guests/jy/jy-ppu.php