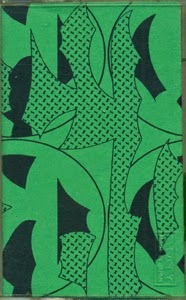 Whereas previous tapes recently,by Luis Mesa and Minoy have reminded your narrator of the eerie soundtracks from childrens TV of his youth (Namely the Clangers). This single sided C60 collaboration between Zan Hoffman and Minóy sounds more like the end of the Clangers planet.We are taken on a trip past the incinerated music tree,a deserted soup mine,with the irradiated remains of the Soup dragon.The iron Chicken is nothing more than a pool of molten metal,now re-solidified as a formless blackened blob.The Clangers homes themselves show signs of being hastily evacuated,with their belongings scattered in the ensuing panic.
This tape offers little clue as to what caused this mass extinction,just the post apocalyptic wind blowing across empty kids TV scenery. All that's missing is the wonderful voice of the late great Oliver Postage(the voice of my childhood) to describe the emptiness.

DOWNLOAD a soundtrack for the kids programme at the end of the world HERE!

The very idea of sound akin to the Clangers evacuating their subterranean socialist utopia and heading out to the inky blackness a la When Worlds Collide has me reaching for the download button.

I used to think it was early exposure to George Orwell, Crass, William Burroughs and John Pilger that informed my (deep) politics but after re-watching The Clangers a few years ago, I realised just how subversive it was and that my enduring love for high strangeness sonics came as much from that programme as it did from the BBC Workshop (and of course the Baschet Brothers track 'Manège' which was used for Picture Box).

Ahaaaa,the saucer people. The Clangers is very much an important,lets say Bible, of counter culture. I can Boast that I have held one of the actual Clangers,for i had a dalliance with a lady whom had lived in the cottage next door to the Postgates.After they stopped making the Clangers,before Bagpuss,she gave her 'Tiny Clanger' as a gift. They are larger than you imagine.

As for 'Picture Box', this bizarrely was my favourite lesson at primary school. Where we filed into the school hall to watch TV! Invariably it was to watch this fine programme,and its hypnotic opening sequence.....where we being brainwashed?

A dalliance with the lady who lived next door to the Postgates, alone, has you rocketing to the top of the 'how cool are you' list - but coupled with some Clanger wool to skin action takes you to another league altogether.

As you can no doubt guess, The utopian socialist space colony that was The Clangers was pretty much my all time favourite TV show as a kid and having rewatched it numerous times as an adult, I just have to admire my four year old taste.

So funny when you mentioned filing into the hall to watch Picture Box! God, that evoked such a memory, I can even remember the feel of the hard gym/assembly floor and like you say, the Baschet Brothers track 'Manège, was so so hypnotic - between that and the Radiophonic Workshop, we were definitely primed for electronic music here in the UK.

In the unlikely event anyone visits this comments exchange and has not heard of Picture Box, this is what we are talking about:

PS> So how big were the Clanger models - I think we all had an image of them as tiny because of the TV screen but when I come to think about it, they must be a foot high say?

yer actual Clanger was approx Ten inches tall.As they were knitted, it was easier for Mrs postgate to get the detail.
All the americans seemed to have was Sesame Street and the Banana splits(who we thought were the Residents at one point!"
Yes, we had to sit, crosslegged on the hard polished wooden floor of the hall/gym to watch TV...did all kids in the UK have to do the same?
I think we were blessed to have existed in such a time.....what shit have kids got now? Grand theft auto?....One direction?....everything has now ended.....next is the human species.

you're time bomb worked! Now i have begun my journey into picture box.

Good stuff, i think i posted a link to picture box elsewhere on this blog. The feem toon is very eerie.