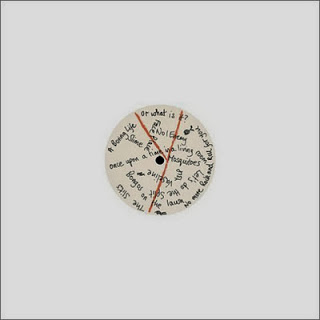 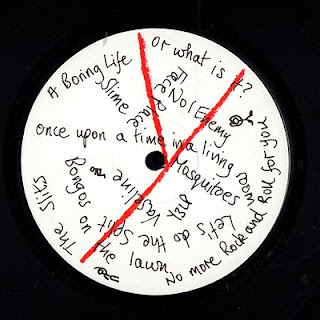 Like The Prats and Eater, The Slits had an underage member, one Ari Up, some posh German aristocrat who hung out at blues parties. They made a major label album, "Cut" for Island, with drafted in session men,and top reggae producers, which,although sounded good at the time, I now know to be a complete and utter 'SELL OUT'. That coupled with a German princess talking jamacian patois, and you have a truly sickening cocktail.
But, before selling out, they were a feral super nova of previously unseen proportions. Witnessing them live was like watching a pack of hyena's stripping bare a corpse; the corpse in this case being Rock'n'Roll, and there ain't nuffin' more Rock'n'Roll than that!
This was only captured on audio in their 1977 peel sessions,and this cassette recorded racket from squatland, London. (Is that anywhere near Squatney, where the young Spinal Tap came from? Ed.)
We have the non-selling out Pop Group to thank for this archive release, on their Y Records imprint; mirroring their own official bootleg release, "We Are Time", from the same year.
These primal paint-stripping rain dances are like having your brains scraped out with broken finger nail extensions, then shit on , grilled, and force fed back to you; and you WILL enjoy it.
I think the following quote from the uber-pretentious 'Lipstick Traces' by Greil Marcus, sums up the situation very nicely; couldn't have written better myself.........does that make me pretentious too?....Y' know I think it probably does!.....ok I admit it I am pretentious! Happy now?????

"All the Slits really left behind is an object screaming with muteness: a nameless lp in a blank bootleg sleeve. I like to think the disc is called 'Once upon a time in a living room,' but there's no way to be sure; with phrases scrawled at random across the label in lieu of titles, you have to decide the names of the songs from the choices offered. 'A Boring Life,' then: once the music starts I've never tried to understand a word.

One Slit giggles; a second asks, 'You ready?,' another answers 'Ready?' as if she never could be, then the fourth returns the giggle like Alice diving down the rabbit hole: 'Ah, ah, OH NOOOOO -' It's the last sound you hear at the crest of a roller coaster, and in the dead pause that follows you have time to remember Elvis in Sam Phillip's Sun studios in 1955, setting up 'Milkcow Blue Boogie' with a little rehearsed dialogue ('Hold it, fellas! That don't move me! Let's get real, real gone for a change!'), except that the Slits' dialogue is too trivial to have been rehearsed, let alone lead anywhere, and then the silence is collapsed by an unyielding noise. This compressed drama - embarrassment to anticipation, hesitation to panic, silence to sound - is what punk was all about.

The Slits were Ari Up, lead singer; Palmolive, drums; Viv Albertine, guitar; Tessa, bass. The Rolling Stone Rock Almanac entry for 11 March 1977: 'The Slits make their stage debut, opening for the Clash at the Roxy in London... [They] will have to bear the double curse of their sex and their style, which takes the concept of enlightened amateurism to an extreme... The Slits will respond to charges of incompetence by inviting members of the audience on stage to play while the four women take to the floor to dance.' A line from an old Jamaican 45 comes to mind - from Prince Buster's 'Barrister Pardon,' the finale to his Judge Dread trilogy, the tale of an avenger come from Ethiopia to rid the Kingston slums of its rude-boy hooligans. Across three singles he sentences teenage murderers to hundreds of years in prison, jails their lawyers when they have the temerity to appeal, reduces everyone in the courtroom to tears, then sets everyone free and highsteps down from the bench to lead the crowd in a cakewalk: 'I am the judge, but I know how to dance.' With 'A Boring Life,' the Slits judged every other version of rock 'n' roll: 'Milkow Blues Boogie,' 'Barrister Pardon,' the crummy official records they themselves would make after their moment had passed.

Nothing could keep up with it. Shouting and shrieking, out of guitar flailings the group finds a beat, makes a rhythm, begins to shape it; the rhythm gets away and they chase it down, overtake it, and keep going. Squeaks, squeals, snarls, and whines - unmediated female noises never before heard as pop music - course through the air as the Slits march hand in hand through a storm they themselves have created. It's a performance of joy and revenge, an armed playground chant; every musical chance is taken, and for these women playing the simplest chord was taking a chance: their amateurism was not enlightened.

'No more rock 'n' roll for you / No more rock 'n' roll for me,' goes a drunken moan elsewhere on the record, echoing the Sex Pistols' chorus for no-future - some unidentified man was singing, maybe a guy running the tape recorder, but it was the Slits' affirmation that whatever they were doing, they wouldn't call it rock 'n' roll. This was music that refused its own name, which meant it also refused its history - from this moment, no one knew what rock 'n' roll was, and so almost anything became possible, or impossible, as rock 'n' roll: random noise was rock 'n' roll, and the Beatles were not. Save for the buried productions of a few cult prophets - such American avatars as Captain Beefheart, mid-1960s garage bands like Count Five or the Shadows of Knight, the Velvet Underground and the Stooges of the late 1960s, the New York Dolls and Jonathan Richman and the Modern Lovers of the early 1970s, and the reggae voice of gnostic exile - punk immediately discredited the music that preceded it; punk denied the legitimacy of anyone who'd ever had a hit, or played as if he knew how to play. Destroying one tradition, punk revealed a new one.

Looking back, it remains possible to take this version of the rock 'n' roll story for the truth, as the whole story - not because the music punk discredited was worthless, but because what little remains of the Slits' music allows you to imagine that the sound they made communicated more completely and more mysteriously than the most carefully crafted work of anyone who came before or after. 'A Boring Life,' heard as it was made in 1977 or heard a decade later, rewrites the history of rock 'n' roll."

Side B
- Or what is it?
- Bongos on the lawn
- Let's do the Split
- Mosquitoes
- No more Rock and Roll for you [Sister Ray] / Once upon a time in a living room

Impossible to resist after reading your spiel! Looking forward to hearing it.

Hi, yes a lot of people said that in the comments on the deleted blog, then they came back saying it was the worst thing they had ever heard by anybody.They were listening, but they weren't listening.
You gotta feeeeel with your inner urban animal.

It's awesome.
Is the 'unidentified man' whose 'drunken moans' are heard on 'No More Rock'n'Roll/Sister Ray' is Vic Godard of Subway Sect? It sounds like him and the words resemble those of the Sect's 'Different Story'.
And of course, fellow trainspotters, the refrain 'No more rock'n'roll for you' was also used by Sect-fans Orange Juice on Poor Old Soul (pt 2).

Hiya, you're wrong about some of the details on the 'Cut' album; they didn't draft in session musicians. They got a new drummer (Budgie) and they re-worked a lot of their older songs, but they played them themselves. I think 'sickening cocktail' is a pretty harsh assessment of such a landmark album.

Aww come on, 'sickening cocktail' is a great phrase. Budgie was a shit drummer/and session muso,and this was a pop album,with ambitions to be children's music.thats why I liked it when i was a child. The bootleg album has the real danger of the slits before they thought they could make money.

Only just noticed your "top ten" posts and was very happy to spot this little beauty - of course it goes without saying that The Slits were one of my first musical loves, I even still listen to Revenge Of The Giant Slits, sad I know.

This was such a great bootleg and I just wish I had been those 4 or 5 years older so I could have seen them live (as a little like Sun Ra), they only really make ultimate sense when you see the live footage (there is an extended scene in either D.O.A. or one of the Don Letts films which has the original Slits/Raincoats drummer Paloma McLardy AKA Palmolive playing and without a doubt it is one of the finest examples of what makes me love music).

Y Records was one of my favourite labels as a teenager - though it was strange how Dick O Dell ended it as you would have thought the money they made from Pigbag would have set them up for life... though perhaps labels like Industrial, Fetish, Illuminated & Y are only legendary precisely because they ended when they did

While I actually rate the book Kodwo Eshun wrote on afro-cosmic music - the interview is almost spinal tap in places and a textbook example of the intellectual/academic recuperation of music - I know you will enjoy it JZ!

Yeah, The Pop Group's new material. I have a friend who described their new stuff as sounding 'Like Haircut 100', which is very accurate. Could be worse I suppose,quite liked Haircut 100.
Slits, didn't like Palmolive leaving,and reggaefying the tunes...as expressed above.
Y records provided me with my first Sun Ra LP, the rather accessible "Strange Celestial Road".
Afro-cosmic music....i'm right there!