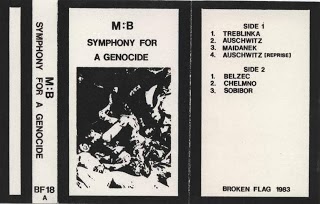 On the day the millionaire intellectual giants of the England And German football teams tour Auschwitz watched by the worlds media. I thought it fitting to post the 1980's Industrial noise classic 'Symphony for a Genocide'.
Knowing the brain power of some of the England team, they probably think 'Snooker loopy' by Chas and Dave is about genocide!?......(in case Wayne Rooney is reading this; genocide is when some naughty men systematically kill lots and lots of people.)
It's even doubtful that these overpaid, self-important dumb-asses have even heard of World War Two,and think that Hitler was a fictional character from them DVD films; a bit like Blofeld from James Bond, who they think are real historical figures!
We could really do with the French team going as well, as France seems to have a real bad case of Holocaust denial, and a shit load of complicity issues to deal with.

Altogether a sonically accurate portrayal of industrialised mass murder, totally lacking in the sentimentality and emotional pornography that usually accompanies the subject.

DOWNLOAD the mediafire from a mass cremation HERE!
Posted by Jonny Zchivago at 18:13

This is the best website on the whole godforsaken internet.

I am humbled by your statement Bill.
Happy Godforsaken New Year to you, and all your kinsfolk.

I just felt the need to say it how it is. Visiting this place is like getting gently encouraged with a high-voltage cattle prod. Everyone should get some.

Happy New Year to you JZ, and all who sail with you.

this seemed to be the appropriate time and place to be introduced to signore Bianchi´s music and i totally surrender...thank you...