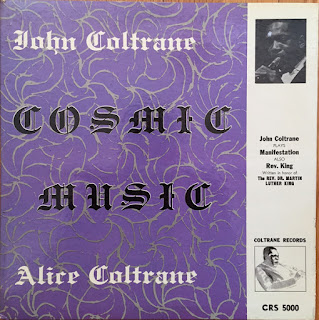 Recorded only months before John's death,and released on Coltranes own label, this is the first offering of Alice Coltrane as an artist in her own right,although maybe it took the death of her hubby to achieve solo status.Someone had to carry on the Coltrane legacy, she did bare the name after all?
Her exotic swirling piano work is cruelly low in the mix,although she has an equal score in the writing credits at least. A milestone in the development of spiritual Jazz,and a tombstone for Coltrane J's forays into free improvisation.
Rashied Ali drums on this as well by the way.

DOWNLOAD from the cosmos HERE!
Posted by Jonny Zchivago at 08:44

I'm not the biggest Trane fan, Albert Ayler and Evan Parker are more to my taste. It's Alice Coltrane that has enticed me in here: her Ptah, the El Daoud is one of my go-to records for all sorts of mood lifts, so I'll give it a go. Thanks, Milly's Grandad.

Hold on - what's all this got to do with Thurston Moore?!

If it's what I think it is, I haven't seen the cover for this album issued on Coltrane's label. A nice record this one, thanks

Any chance of a re-up?

Nah Fanny...its alright. Its mediafire, try it several times and it'll let you through. People are still downloading it in their hundreds.