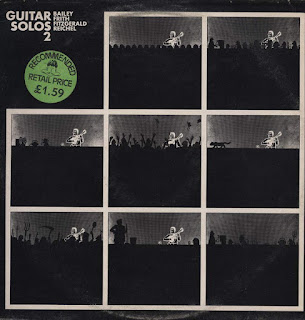 From the days of recommended retail prices,cut price loss leaders, and when Richard Branson released weird records (Caroline being a Virgin offshoot), instead of trying to fly billionaires into space.Here's a cheap attempt to fly spotty young men from their bedrooms into a obscure headspace of avant garde improvisation using the seemingly unlimited potential of the humble guitar.
Yes, Derek Bailey was,briefly, on a Virgin Records release, and shares this compilation with a few of his acolytes and his West German equivalent, Hans Reichel;not to be confused with Krautrock guitar hero Achim Reichel of 'A.R.and Machines'.Hans style involves a lot of hammering the strings like a dulcimer, or the thinking man's Eddie Van Halen. Achim, used Echo boxes a lot, like Pink Floyd or Manuel Gottsching of Ash Ra Tempel;not as innovative as his namesake, but rather effective none the less.
No Idea who G.F. Fitzgerald was or is,but he obviously digged Derek Bailey somewhat.
Virgin contractee Fred Frith gets the opening birth,to try and push some rare sales of 'Henry Cow' product;but shows plenty of the invention that got him on Ralph Records, and to play on some Residents records, and later with John Zorn.
Why is this solos number '2', when Solos Number '1' was basically a Fred Frith solo album, I don't know?
I expect, there would have been at least a few hairy yoofs who bought this expecting sidelong Hendrix style solos and got a terrible shock, wanting a refund of their £1.49?.....NO hairy Youth NO!

DOWNLOAD and fly into space solo HERE!
Posted by Jonny Zchivago at 10:16

Fitzgerald's a friend of lol coxhill, on a couple of Reel Recordings with him. Did an all over the place album called Mouseproof wth at least one jazz rock tune on ity

I reckon I was one of those spotty young men. This is actually teen-age nostalgia for me. No doubt it’s naive of me, but I had the impression after Fred’s Guitar Solos album, Virgin/Caroline again let him do what he wanted for GSII, allowing him to introduce others working in a similar vein. I got Hans Reichel straight away. Derek didn’t do much for me at first, but I understood he sort of founded the style, so I guess I’d better work on it. G.F sounded like a Frith clone, which wasn’t bad thing. I later learned he had released a more pop-oriented album in 1970 called Mouseproof. Apparently it had something of a cult following, initiated in part by an intense d.i.y. pre-release promotion campaign involving hundreds of stickers posted around London with an iconic cartoon of a mouse wearing sunglasses, along with cryptic ads in MM, etc. It was nothing like the abstract guitar improv on GSII,, but it’s nice enough. Here ’tis for anyone who cares to give it a listen: https://www.mediafire.com/file/qblmxdfsoodf3v7/G.F._Fitzgerald_-_Mouseproof.zip/file BTW, I only have a freebie account with Mediafire, which means uploads only last 15 days, so if there’s any interest, feel free to upload it to yours.

As for Virgin, back in it’s early days before it was infected by money and suck, the choice of artists had more to do with Simon Draper than Richard “send the rich into orbit” Branson. Read all about it here: https://daily.redbullmusicacademy.com/2017/10/simon-draper-virgin-records

I remember being parked in the rain with a date while Only Reflect played on the car cassette. Turned out It fit so well with the sound of the rain on the car roof. I can’t imagine what my date made of it all. I haven’t a clue where she is now, but I do still have that memory….and this album.

Sod it, Got it all wrong, again. The cover of Mouseproof was a CAT wearing sunglasses. Makes more sense that way I s'poze.

OK, final old post comment: Gerry Fitzgerald was also in Radar Favourites with Charles Hayward and Geoff Leigh. He was later replaced by Charles Bullen, but no recordings of that era exist.