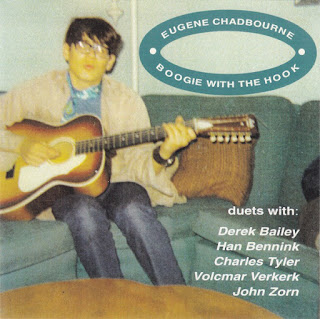 If there's one thing that Eugene Chadbourne managed to avoid is music with Hooks, in fact music that boogies too. So one assumes,once again, that this cheeky little monkey is being Ironic?
We got a bunch of duets with masters of the improvisation arts, like that man Derek Bailey again,along with his Dutch drummy mate Hans Bennink, and Eugenes old jazzbo chum John Zorn. Also making a posthumous appearance, is Free Jazz legend Charles Tyler. Posthumous as he died four years before this was released.....he's on track five.
An anti-matter version of 'Duelling Banjos' makes up track 6 with some Dutch Banjo player called Volcmar Verkerk.One Would have liked to have seen this banjo duel replacing the original version in John Boorman's (no relation to Martin I am told....shame) movie classic "Deliverance", along with Burt Reynolds getting the severe bumming from the Hillbilly.I'm sure that version would have won the razzie for worst film,or even worse, the Oscar for best film.
I remember watching that film on the Monday night movie slot with my parents in the mid-seventies,but cannot recall the male rape scene at all! I'm sure there would have been one of those awkward silences which occur when families witness sex acts on TV, but times ten.So i reckon it was censored.The BBC taking care of our hearts and minds again.....thank you Auntie Beeb.
Alas,no,sadly it wasn't Burt who received the brutal buggering, but the fat one who was not unlike Eugene Chadbourne in appearence,minus the glasses.I'm not certain, but I have a misty recollection that the other Hillbilly looked like an unshaven Derek Bailey....again, sans lunettes!?
The Buggering was the Hook.......see wot I did there?

DOWNLOAD der bugger man and get hooked and fucked HERE!
Posted by Jonny Zchivago at 10:58

Mega. It's like a "Supernatural" for an inverted universe. Boogie on.

He could be being ironic with the title. Or maybe he's just aware of John Lee Hooker existing.