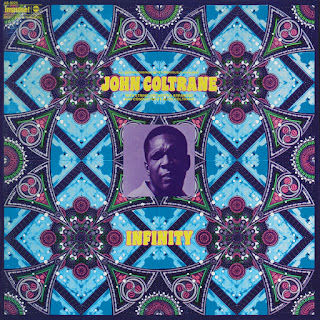 Another post-mortem examination of the out-takes of John Coltrane is this exhumation of a few sessions from 1965 and '66,later enhanced by the cosmic widow herself, wife, Alice.
It's really an Alice Coltrane record,filled with hindu inspired lush string sections,abstract organ work and Harp glissando's, plus samples of John's tenor sax laid over the top.
If you're an Alice fan, this is her great lost work,if you're a John fan it's a cynical cash-in. As a fan of both, this is like playing two albums by either artist together at the same time,which is something I always like to do from time to time......sometimes it works,and it works here, very well.Should really be credited as a John and Alice Coltrane record,but no-one knew who she was, so,its a John Solo effort for commercial purposes.
All the usual suspects are guesting on the personnel list, like Rashied Ali,Elvin Jones, Pharoah Sanders, Charlie haden, McCoy Tynor;they all dug in to lend a hand,for what in all intents and purposes is a tribute album to one of musics most influential artists......by his widow and old chums.Ahhhh!

DOWNLOAD from infinity and beyond HERE!
Posted by Jonny Zchivago at 19:13

This was one of my earliest (first?) exposure to the world of Coltrane. Years later I read reviews from 1972 that bemoaned Alice’s dubbing strings to recording of the great gawd of modern jazz as “sacrilege.” Funny that they could come to that conclusion over performances that had not yet been issued to the public. I imagine John would have been thrilled. The original unadulterated recordings were released years later to make purists happy. Back in the day I liked Alice’s albums more than John’s. To my ears they covered more territory. I like hubby and wife just fine these days. Didn’t you say “Om” was the first Coltrane record you heard? Damn, everything else must’ve seemed pretty tame by comparison. Anyway, I don’t think this one’s been reissued. If it was, it’s not easy to find, so thanks for posting.

oooh! never heard, thanks!....at the end Alice did some very weird recordings on a $3 cassio and sing/chanting over it. Despite common sense, they are pretty great! Also her solo lp with the peter max cover is something else!...are you sure she didn't have solo lps before John?...I'm not! hahaha

at last! a JC lp I can work with! Thankks for this, love it~