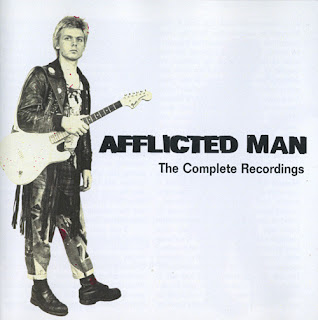 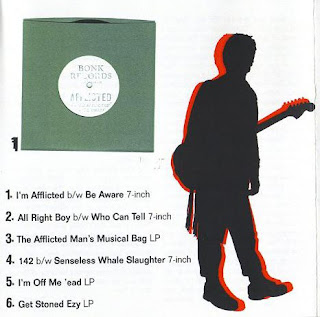 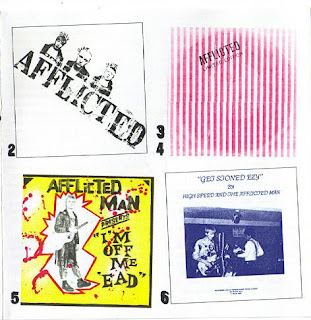 Being Christian is some kind of psychological illness,but then again it has lots of stuff in common with Punk Rock. All encapsulated in the classic ,but fractured outsider punk personality of Steve Hall.
Both Dogma's are full of glaring conradictions,which has their High-Priests muttering wildly opposite statements,although I've yet to hear of a Punk Rock Pedophile as of yet...there's still time.
Joke time.....Q.What's the difference between Acne and a Priest?
A. Acne doesn't cum on yer face before you're Twelve.
Funny huh?
Yeah the morally repugnant Steve Hall embdies the most dramatic shift of polar opposites since Saul turned into Paul on the road to Damascus. If the same journey was made today Paul would have certainly been tranformed, not into a Saint, but into smoldering body parts as he triggers an Improvised Explosive device left there by Islamic State operatives several years hence.
Oh,yes. Mr Afflicted turned from a violent,Nazi flag waving,obnoxious,beer swilling drug and glue abuser.......as in a tabloid newspaper's idea of what a Punk Rocker was, and Steve indeed lived out these  press headlines to the letter;......into a meek and mild Born again Christian. He shifted from 'Punks Not Dead' to 'Jesus' Not Dead' in a matter of hours after chancing upon a devious God Squadder in his squat, banging on about how to let Jesus in your heart.
Here's Hall's version of  how Hall turned into Paul, literally, on the road to the 100 Club for the last time:
"My brother was talking to a guy at the time," he recalls, "who was sharing to him about the Lord Jesus Christ. I asked this bloke, 'Come on, how do you get this Jesus anyway?', in the kind of way that made it look like I didn't care. But deep down I was interested, because no one could help me out and I was desperate for help. He just said to me that Jesus could live in your heart. And I was riding up the road on the motorbike after that just saying, 'If you're there Jesus...' It was a matter, like it is for all of us, of just taking that first step, and once I had I'd never felt anything like it. I really felt God come into my heart and my life and that's what made me cry. It made me burst into tears, I just could not believe what was going on."
Now don't go getting any idea's you lot! I know how impressionable you "The Public" are.....and bloody dangerous too. A the drop of a pay rise, or a compliment you lot can vote in a Hitler or a moron(Trump),or,as in the case of the British,be the only electorate in UK History to vote away Freedom as in Brexit,and Freedom of Movement!
We can also turn into blinkered religious idiots at the mere mention of our mortality.
Maybe Steven was always looking for a Religion,and found it in Punk Rock.The only downpoint was that Punk didn't offer eternal life,no matter wat Wattie (of the Exploited) says.
Luckily Afflicted Man never sang about Jesus,for good reason,as ALL religious pop is appaling....but also funny if its done correctly.
More in the David Koresh school for twisted morals than Handel's Messiah.Christianity should definitely stick with Classical music, and leave 'pop' alone.
Afflicted Man's music is classic DIY Outsider Punk,recorded and released on a shoestring budget,often presented to the world in a candystriped Sweetie bag,the kind that you got your Pick'n'Mix in from Woolworths.His songs’ reliance on repetition have as much to do with the limits of one man’s taste and abilities, along with the studio capabilities of the times, as any sort of applied aesthetics(I didn't write that bit).Anyway, his incredibly rare records feature an impressive talent-stretching cornucopia of sounds, from one chord punk to PiL-type dub noise to glue-fuelled psychedelia, with Get Stoned Ezy (1982) a jaw dropping display of zero-budget production and incompetent guitar freakouts;and we all love that inadvised marriage don't we?
As for live shows:
Hall said: "We had a bit of a political following that I don't really like to mention too much... a Nazi British Movement following. It was our fault a bit, because we got ourselves a following and we just thought 'let's run with this.' I guess we did that because we had no morals really, in one sense, and so we went down that road."
Again he had an uncontrolled need to belong to a religious movement,even though he was obviously the Doubting Thomas of the British Nazi Movement....but as I've mentioned before...Nazi's are Funny......in fact so are Christians......er...and 'Punx' for that matter.
Stevie fills us in on the end of his Punk career:
It wasn't long before he realised that there was no chance that the two lives could co-exist. "At the end of the day I got born again," he says, matter-of-fact, "and I tried to witness to the rest of them, but they didn't want to know. Then I just felt God pulling me out. I played the 100 Club and I was looking across the audience, jumping all over the place, and I just thought, 'What am I doing here?'(Yeah I've been there myself JZ) I came out of there and I didn't go back." Moments later, God began to hit Hall with heavy doses of grace and mercy. "After that I got married,and we had three lovely daughters. At least the God Delusion seemed to save him from his obvious mental crisis,as he admits..."Being saved took me away from the whole drugs scene and the punk music and I really came into Christianity in a full way. I was baptised in the Holy Spirit and started to do God's work.".......fucking hell!.....
Well, i'll help Steve doing God's work, and give his music away for free.Jesus would certainly approve,and maybe even have liked the music too?....notice the use of the past tense in reference to Steven's personal saviour?...if you didn't, you need saving....Please Jesus save us from your followers.
Tracklist:

C'mon, that's Sting in bad shoes. Wait. If that's true, then "penis" is an appropriate comment.

'i'm off me 'ead' lp at window rattling, pant pissing, neigbour enraging volume is a real fucking treat and so are you

It's new religions you have to watch out for! Belief in science for one. Pasteur faked his results (he kept two journals - one he gave to science (the fake results), the other (the real test results which proved nothing) he hid away) and became rich (along with big pharma) with his germ theory which is a load of bollox! Sheeple follow scientists without question, wear useless masks which harm them cos some dick in a white coat says so, do stupid (anti)social distancing cos scientists never lie (thalidomide, polio, etc). Clean running water and sanitation eradicated disease, vaccines invented new ones, so did pollution, chemical contamination and the deadliest of them all, vaccines killed or miamed. Big pharma worship money, you can't sue them if your child is dead after being vaccinated or has no limbs, or has autism, asthma, epilepsy, downs syndrome, eczema, etc.

Don't ya just love anyone called anonymous;)
Of course the comment above is the disease there's no mask for.A new kind of anti-enlightenment for the new dark age.A digital version of book burning.Hail stupidity.
But equally, this idiot could be part of an illuminati plot to actually make us all stupid.....if he exists at all. A Fake dumbass.
Thats ironically what the new information/disinformation age has become,nothing is believed. At least scientists make efforts that try to reval their disuted facts whereas "Trumpists" just talk beyond the meaning of even words themselves.They've even burn't the dictionary! We're doomed but not for the reasons they give.....and they think we're the "Sheeple"......ignore them and they won't go away sadly.....this dick's probably abusive response to this will not be published......unless its even funnier of course.

ps of course i meant "unknown" rather than anonymous....there seems to be two "unknowns"?....one seems more grounded in that foreign country call "Facts" than the other lunatic.....he's the Hilary and Donald are friends one.

@greatdividing....at least there's one sane person in here with us?!

I had my flu jab a few weeks ago and in no time at all, one by one, all of my limbs started to wither away and were reduced to black rotting stumps, and then they fell off. The stench was awful and the air in my room became putrid with it, so I was glad when the doctor came over and took them away, since all I have left to manipulate things with is my mouth, like that guy in Freaks.

When this 'so called' virus magically disappears, I'd be interested to know the comparison numbers of democrats to republican deaths. Maybe Anonymous is right and masks are useless, but it seems from what I've seen that democrats are more willing to wear a mask.
I hate wearing these masks, but when this 'so called' virus is over, I WILL wear a mask in public places if I've got symptoms even of a mild cold - but better still I'll avoid public places. I know from experience that colds can be caught by being in close proximity to people - my personal fact.

medical science causes downes syndrome?........not sure how they glued all those extra chromosomes onto the 21st one, but you never know!...I find mainstream science is a little dicey, just like mainstream anything.
But so what. I'm not planting my flag of "fierce independence" into the tiny hill of mask wearing. I guess that fight keeps all the plebes busy. Thanks again for everything Johnny.