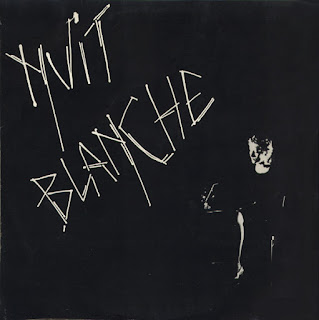 Another collection of chart aiming Belgian new romantics that proves not everything that came out of Belgium between 1980 and 1984 was utterly perfect.
I always use the showbiz atrocity that was Classix Nouveaux as my plimsol line of BAD, and this one is nearly sinking under its listing cargo of sub-Duran Durany pretentions.
Its accidentally weird stuff as in 'How did anyone exposed to these golden times, when genius pop music was everywhere in abundance, totally miss the good bits and just cherry pick the worst parts,slap them all together and become....well.....Classix Nouveaux?'
Its this paradox that makes this dartboard missing rubbish so interesting,and...dare I say...perversely enjoyable? Its not even what i like to call, 'Good-Bad', like Wesley Willis or The Shaggs, its just plain awful...but strangely alluring?
Is there something wrong with me?...nah!...Now where's that Classix Nouveaux album,medication and some headphones?

DOWNLOAD this dark white night for belgium HERE!
Posted by Jonny Zchivago at 08:32

Shard was a belgian duo (somewhere between Front 242 and early Jah Wobble(?) that commit this demo-tape in 1985. It was Pierre L and Xavier M's project, they couldn't find any label to release it but objectively, they were better than many similar groups. So both tried to win some little money to auto-produced it, by testing medical drugs for labos. Sometimes, they were very very nervous or tired and they couldn't stand it very long, not enough for pressing an album or Ep. So they stopped the project in '86...

Jonny: Thank you, you nailed it again!
Anonymous: Thanks! I really liked Shard. I wonder how many of these pearls remain forgotten at the bottom of old box shoes... Must check the ones I left at my parent's when I left, but probably there will be nothing special (only Crass-cloned bands...).
Cheers and thanks, JG

Yeah, Shard is good.
Probably do a proper posting of that one.....fame at last.

Yeah! Shard was full of talent!
I posted it around 2010
http://letroublenet.blogspot.com/2010/04/shard-1985.html
and when I told it to Pierre, he had completely lost and forgotten
this tape, it took a moment to tilt! Than he was okay to
share it like that, just a bit useless he guess...

I'm not sure there is another surviving copy of this tape
It's very cool you enjoy it!
I was a total fan, waiting for the album and the live version,
than, Pschhhiiiit! Xavier ran away to France because the call up
in the army. Ah the '80s, it was great (:

If you visit letroublenet.blogspot.com you'll find more informations about SHARD (but in french).
There was a bad script from 4shared that was blocking the access, I just took it away today.
But if you visit the rest of the blog, you'd better block 4shard's scripts cos there remain some in hidden corners...