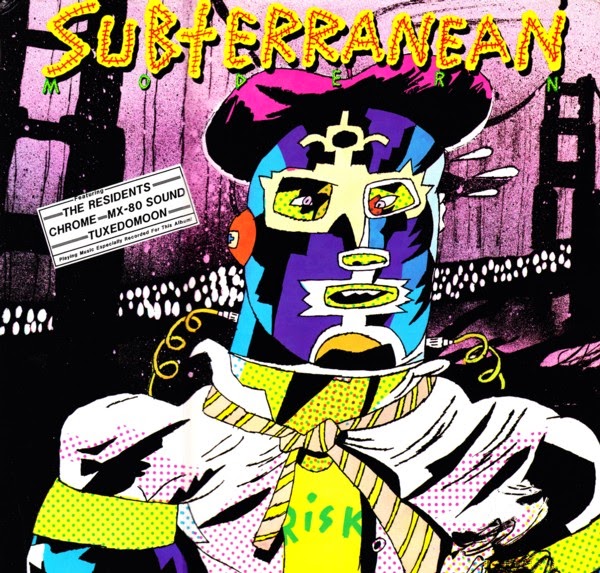 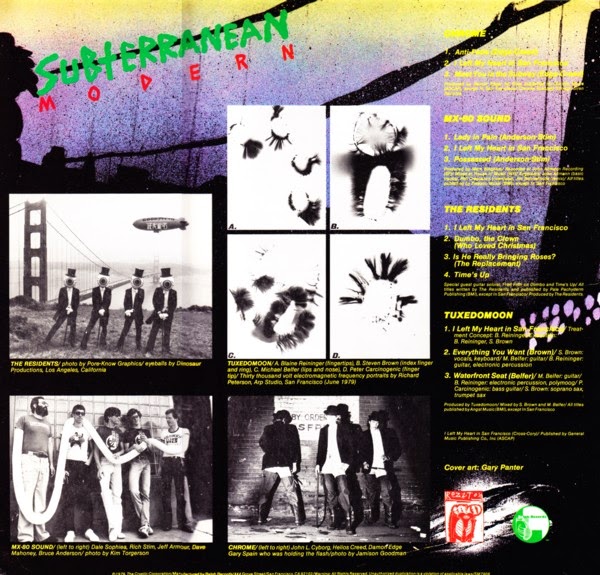 "Subterranean Modern was Ralph Records' first album involving music from anyone other than The Residents or Snakefinger. The idea was to widen Ralph's appeal by bringing a greater variety of styles into the label. To this end Ralph had four band submit contributions on the theme of "San Francisco". Each was required to include a version of <a href="/artist/Tony+Bennett">Tony Bennett</a>'s I Left My Heart In San Francisco. The four bands chosen were The Residents (of course), Chrome, Tuxedomoon, and MX-80 Sound..." (notes from The Residents website)

Another fantastic compilation with The Residents on it is the near perfect “Subterranean Modern”, which was the first release on Ralph to feature 'other' bands other than The Residents. What a magnificent quartet of examples from the crusty edge of the pop-pie we have here.
The proto-industrial punk of the beyond great Chrome, the proto alt-rock pre-post punk of MX80 Sound, the unclassifiable Residents (sigh!), and Tuxedomoon from when they were good,if not great!
This is the format that best showcases The Residents, like side one of 'Fingerprince; like 'Duck Stab',like 'The Commercial Album',like 'The Tunes of Two Cities'; amongst too few other examples from the eyeball headed ones vast back catalogue, that,quite frankly, after 1984 sucked bad! They were always better,touching on genius with the shorter avant-pop format than the stretched out concepts of, for example, Eskimo.Maybe 'The Big Bubble(part Four of the Mole Trilogy)' was their last good album.Also the over embracing of the 'latest' technology also fucked up the inventiveness......as it does with everyone. Here we have The Residents at their absolute peak of strangeness.

DOWNLOAD from a modern subterranean paradise from the past HERE!
Posted by Jonny Zchivago at 21:29

hi. great blog.
do you by any chance have 50 synthesizer greats by david chesworth?

I'm not sure I should tolerate adverts for iTunes on here?..ah what the fuck! No i don't have this album by the way.

Fair enough, a lot of the later Residents stuff isn't as great as the ones you mention, but surely you can allow 'Freak Show' is pretty good? Even if it is a bit Fairlight sounding.

I love your blog and the memories it evokes. Do you have the other Ralph Records sampler callede Frank Johnson's Favorites? Would love to hear that again. Either way, thanks for all your good efforts.

You haven't heard 'Freak Show' !?....i suppose I could squeeze it in somewhere...I dunno if it fits in with the blogs somewhat stretched concept. Its the state of the art technology you see....not very DIY that.

In fact try this link,if it don't work for you,i'll upload it to google drive for ya.
http://www.ulozto.net/xCYKdyf/1992-the-residents-freak-show-special-edition-zip

Oh, and by the way I do have Frank Johnson's favourites.Its ripped,just waiting to be edited.It will appear soon.

YES! This album is amazing! Thanks you very much!!!!!!!
Desde Chile!