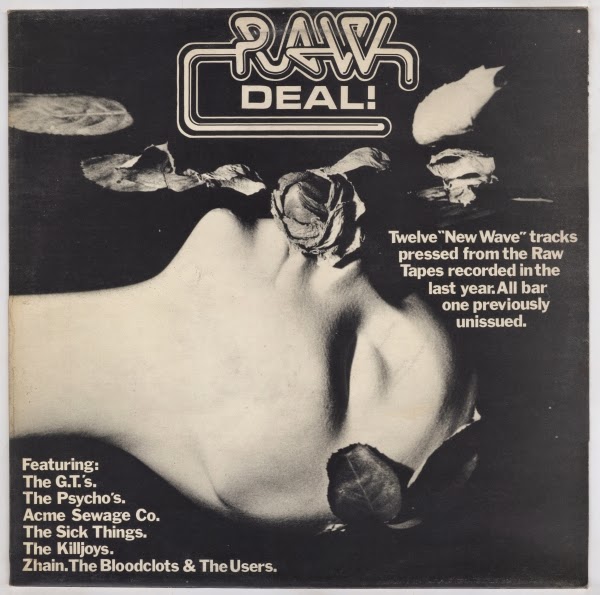 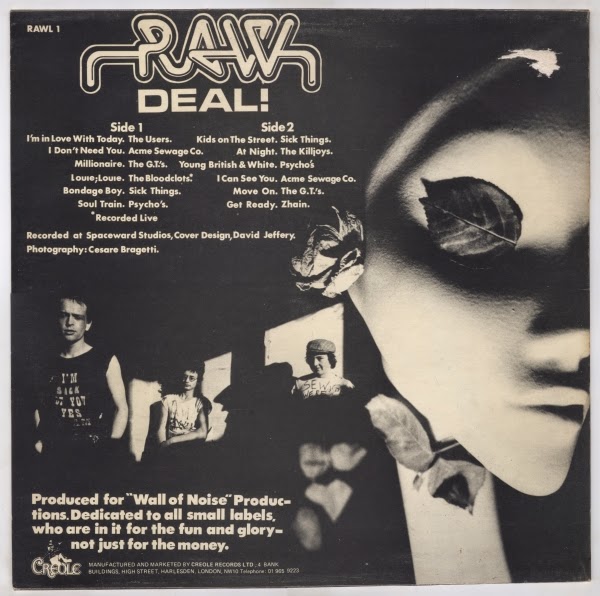 When the human race is on the brink of inevitable extinction in a hundred years or so, and a database of all great human achievements is launched into space to preserve this culture for some lucky nascent alien race? To maybe learn from,and hopefully avoid the same fate. The person who has the job of including the greatest ever record labels has to include Raw Records in the top three or four!? (perm any two from Ron Johnson, Fuck Off, Factory,ESP,Impulse,Rough Trade,Deleted,etc to make up the remainder of top places).


I remember taking my flares wearing Australian cousin 'down town' to go record buying during the height of Punk Rock. Visiting the UK for the first time since 1968, it was like he'd arrived on another planet; Punk Rock was not such a huge phenomenon back in Oz, where the Beatles and Abba still ruled supreme with da yoot. Strange from a land that gave us The Saints, The Victims, and Radio Birdmen!?
After enduring a rendition of The Users “Sick of You” played at ear bleeding volume,he told my Mother that he'd “never felt so old!”.Outside of the UK,certain North East coast US cities, parts of California and Sweden(?), it was the same story everywhere.


This is the punk sound I prefer, no charlie big potatoes here; punk from the provinces. Even the laughable cockney-isms of the young Kevin Rowland from the Killjoys, who came from Birmingham.
This is Outsider punk;a melange of Chuck Berry riffs, pub rock, teen angst,glue,speed and lager; the spawn of hopelessness. Forget chart friendly unit shifters like The Buzzcocks,these tunes were unlikeable;unless you understood ,emotionally,where they were coming from. Having a future wasn't good enough for these kids.

The fucking problem is, give 'em (the modern thoroughly brainwashed 'facebook' generation) a couple of quid in the back pocket, a steady income, new television and X-Box and they (who the fuck are 'They' anyway?), could do any atrocity and no fucker would complain. This was the problem with Punk Rock ,before Joy Division and industrial music; too much focus on the smaller picture, unemployment, boredom, and lack of money. When the real problem was this illusory system with fake goals, carrot and stick slavery, and the unelected controllers behind a fraudulent one party democracy. The current situation is one of an Orwellian Reality that we have been stealthily manipulated into accepting with almost zero dissent. Where's the punk rock today?............its here on “Raw Deal”, kids with No Future from 1977; how right they were after all? We've got a future but we don't fucking want it!


Musically, we've got all the Sick Things tracks that never existed, an errant Users studio track, and the Psycho's muttering the taboo about being British and ,gasp, White! Its all good,if not great.

Thanks. I nearly bought it once but it didn't have The Unwanted on it!

Yeah, everyone hated the Unwanted,I thought they were pretty good myself;a bit like a southern Drones, but with less musical ability. Beware the "Hive Mind"!

Have both of these albums. Being a mere youngster of not 40 (yet) they're the Damaged Goods re-issues.

I bought all my punk records from the Raw geezer's little shop in Cambridge in 76-77. Had no idea at the time he was doing such great work besides supplying us all with the new releases.

Modest chap too, Lee Wood was his name was it not? Top man.

Lee Wood was (and still is I hope) the very fellow. I stupidly thought all English towns had shops like that with all the hot off the presses: new discs, imports, Sniffin' Glue and all. Cambridge was lucky, I realise now. He organised a poorly attended gig at a scuzzy boxing club and/or scout hut type place. Cherry Vanilla played with The Police (pre-Sting) as her backing band. The Users were the openers. There were about 20 of us there as I recall. The Users were fab, Ms Vanilla looked like she was from another planet, which I suppose in a way she was. Pearls before swine, generally, but that Lee Wood was really doing a good job.