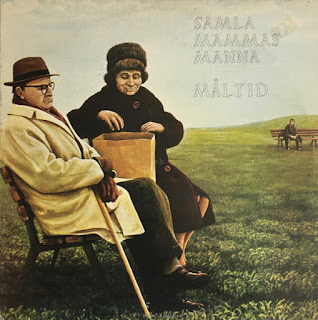 In a glaring attempt to pick something not Obvious from the groups who performed at the genre defining original Rock In Opposition Featival back in yee olde days of 1978. I give you a Swedish band who ,(A), aren't Abba, (B) contain no future ABBA collaborators or Members, and thirdly, (C), are certainly NOT Swedish Punk,or on a Killed by death compilation. All this blatant non-alignment with Swedish musical cliché,without even mentioning IKEA or Volvo, suggests a record of great promise.
As it turns out ,they are basically Canterbury Prog emulators with some rather annoying vocal bits that suggest a.....sharp intake of breath!.....sense of humour!? Prog Humour is never something to boast about,and is even more frown defining than even Psychedelic Humour. Comedy music is seldom recommended,99% of which ends in disaster and polite embarrassed applause. Especially if you're making serious music,and add a spot of  funny stuff to show that you don't take yourselves seriously,when you most obviously do.
I spotted this cover from afar,and thought it was a unhalfbricking style photograph of a pair of elderly types having a Gravelax sandwich....disappointingly it turns out to be a semi-photorealist painting,that, again may suggest prog humour!?
I'll tell you what definitely is NOT funny about this record,is that god-awful high-pitched, falsetto i think they call it, vocalizing.
You know that feeling you get when you trip over a crack in the paving,or are passed by an over revving Moped in first gear; that you momentarily wanna kill some fucker!?....that's how i feel when these Swedes from Canterbury make their silly hi-pitched noises.
Other than that it's okay.
It would be five years before the inauguration of Rock In Opppostion,so maybe they sacked off the vocals by 1978?
I've never been brave enough to try and find out.
I understand that the Turkish objections to Sweden joining NATO were based around having heard this record. Now NATO are considering using it to counteract all that state approved prog on the old Soviet official record label that Putin has been secretly hoarding alongside the Novichok;.. Melodija(its spelt several different ways smartarses!).
Tracklisting:
1 Dundrets Fröjder 10:43
2 Oförutsedd Förlossning 3:10
3 Den Återupplivade Låten 5:53
4 Folkvisa I Morse 2:07
5 Syster System 2:27
6 Tärningen 3:33
7 Svackorpoängen 3:11
8 Minareten 8:21
9 Værelseds Tilbud 2:26
10 Minareten II 4:40
11 Circus Apparatha 6:02
12 Probably The Probably 3:54
DOWNLOAD some flatpack canterbury prog via sweden HERE!
Posted by Jonny Zchivago at 13:18

Hi there,
link don't work...check it please.
Thanks.

Jonny, I think the Samlas may just be too chipper for you! Even at their gnarliest, there's something bucolic about them. They made a record just after the big Rock In Opposition tour (where of course every one of those bands got to hear each other every night) called Familjesprickor, which apparently translates as "Family Quarrels," and that's got a much more aggressive sound in terms of tempo and dissonance and abrupt transitions.

And check out some of the other bands. Univers Zero is like Bernard Herrmann started a rock band: episodic suites that generally start at Robert Smith having a meltdown and end up at witch burning. Stormy Six is probably the least distinctive of the lot, but during the period where Rock In Opposition was actually touring, they were writing stuff in the Henry Cow weird chords and sprung rhythms vein without any Canterbury. And while they weren't in the first tranche of bands, I can't recommend strongly enough Aqsak Maboul's album Un Peu de l'Âme des Bandits.

their later work as Von Zamla, with no drummer, way more complex and way beautiful

I still believe there's connection ABBA and Samla buried somewhere in the band’s history. I'd be unnatural if there wasn't. Agreed, vocals aren't their strong point.

I played Sammla's "Familijesprickor" for a friend once and she thought it was The Allman Brothers. Ouch.

No disrespect intended, but Sweden is kind of a funny place. Once caught a flight from Goteborg to Umea (not bothering with all those "special characters") and was chatting with some band also on the flight. Still chatting as we disboard (?!) and all these people start taking pictures of us! I was all "what the hell?" The folks picking me up--to play my stupid little show in some cafe--inform me that they were the biggest band in Sweden apparently. A decade or so later and I still don't know who they were, but I'm fairly certain they weren't ABBA.

Left out the "funny" part of that story, that being: what the hell were these guys doing on the same cheap-ass flight as me? It was one of those Ryan Air type operations which flies everywhere for like ten bucks, only you have to figure out how to get to (and from) their freakin special airport, which is never _the_ airport, but, rather, is some building out in the middle of nowhere, next to a gravel road that barely qualifies as a runway. And the building is somehow always smaller than your average Subway franchise. If you're the paranoid sort, which I am, it always feel like you've somehow stumbled into being a victim in some human trafficking ring.

Nice story Parmalee...liked the second part! But, who was that band? Big in Sweden? Far out...must be dark and dusty...

Nice story Parmalee...Swedish super band? Must be dark and thursty...

Not at all ABBA, that's whoesssssssh

I still haven't figured who the Swedish band was. It was around 2010, but that really doesn't help much. They were just guys who perhaps paid a bit too much attention to their hairstyles (though they were pleasant enough). That said, I don't think I would recognize the biggest band in America. Who would that even be? Is that even a "thing" anymore?

Where in the France are you? Am in the south for the next 2 weeks and would gladly buy you a beer or ten or Sauvignon Blanc from Chateaux of Monte Cristo or Coke Zero with vanilla flavor or whatever beverage you prefer. Also, wtf does unhalfbricked mean?

I'm around Montpellier.A pint or 10 of Irish Bitter would satisfy.
Unhalfbricking comes from a word game that Fairport Convention were playng(back in'69),using dictionaries to come up with an album name. Half bricking is a builders term when doing a wall,every other brick is turned to make a half-brick effect. They wanted the opposite of that, so the lovely Sandy Denny came up with Un-Halfbricking...so Voila!

If memory serves, the period/scene represented here was also known as "The Movement", either informally or formally. A massive and thorough hard bound book was published about it, followed by a multi-disc set compiling tracks from many of the artists.

Apparently an "impossibly rare" entry in the canon is the one and only release by Carsten Regild (self-titled), reported to be a sound collage type thing.

Thanks as always for the post and your ceaselessly entertaining narratives.