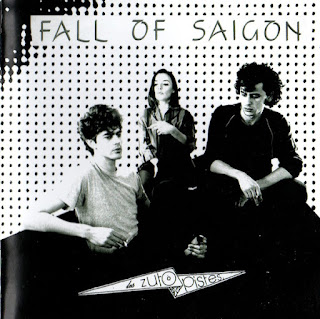 No its not a North Vietnamese Fall tribute band!
It's frenchy Minimalist composer Pascal Comelade,moonlighting with his minimalist pop trio named after a This Heat tune.
Harboring a knowing glance in the direction of Young Marble Giants,and maybe even..... Weekend?
Pascal is not shy of wearing his influences on his sleeve....that's him on the right there,with influenced sleeves rolled up,trendily, to the elbows.I remember when the Style Council used to do self-consciously french things like that,such as wearing,(or rather NOT wearing) a cardigan tossed stylishly over the shoulders and tying the sleeves into a loose knot atop a Breton inspired polo shirt.You can take the boy out of Woking,but you can't take the Woking out of the boy.....but you do have to leave Woking if you wanna wear a Breton top....fact!
There also a version of my funeral theme tune on here, The TV Personalities' classic "Part-Time Punks",further emphasizing Pascal's fondness for "les Rostbif pop",especially it seems Kevin Ayers too....which i think stems largely from the fact that posh Boy Kevin had a handy grasp of French thanks to the British Public school system. And as we all know,if you slot anything French or in French into an English pop tune you have a career for life..... in France!...just ask Sting.
However, similarly, the Brit's love to hear a French bird singing in Engleesh, which surprisingly didn't lead to Indie success in grey old foggy Albion.They could have stuck to it a bit longer, but i think Pascal had other things in mind for himself,embarking on a prolific solo career that continues to this day.
The other French musical commandment that has been observed here on this compilation,is the obligatory Doors homage.Every household in France has a Doors Album, or Zer Doorsss as they call them.They all think Morrison was a poet....in fact Morrison thought he was a poet too,maybe even a great poet?So as he died and was buried in Paris,this means that their hero is now French,so Zer Doorsss are forever enshrined in marble and stone among the elect of French art and culture......Would i be out of order to suggest that they can flaming well have him...slash...them? Plenty more where he came from.
Nonetheless, this version of "The End" is actually rather good?
The End!
Track Listing:
1.Visions 2:21
2.Blue Eyes 2:08
3.She Leaves Me All Alone 4:22
4.So Long 2:28
5.On The Beach At Fontana 3:22
6.The Swimmer 2:15
7.The Model 3:21
8.Part Time Punks3:12
9.The End 9:43
10.Andalucia 2:02
11.I'll Never Be Back 4:54
12.Sha La La La 2:58
13.Let It Go 2:41
DOWNLOAD the rise of hoh chi minh city HERE!
Posted by Jonny Zchivago at 15:10

Great Thanks for this one. You're right for the Doors. I bet Patti Smith shall be burried in France too.

This is amazing. Thanks!

this collection is very good! I have tried for years to buy the original fall of saigon 12 inches, but prices are always too high...and indeed their version of "the end" is absolutely enjoyable (imho)

Btw, it has been a while since i've heard the - I'm tempted 2 say - "groovy" expression 'bird' relating to young female human beings. It's thyme for revival!

Indeed anon 2..i was watching,this weekend past, sandwiched in between Larry the Lamb, and The Lone Ranger, a childrens film foundation movie from 1976, called the Night Ferry;In which a gang of villans lead by bernard cribbens, steal a Egyptian mummy,and some meddling kids get involved. They try and sell it to a French Lady,whom the kids refer to as the "French Bird" to the rozzers,and any other adult who care to listen.As i live in France I am surrounded by French Birds....most not as charming as the French Birds in the Night Ferry....recommended viewing on Talking Pictures Sky channel 328.
Life seemed so much better back then...but if we ever invented time travel and went back there, we'd be bored shitless....no computers No internet,had to pay for records,if you could find the fuckers...fuck that shit. I'm staying in the present...a very Buddhist Philosophy is that....so fuck that shit too.In fact fuck everything.....see what can happen just by referring you female humans as "Birds"?!

@ "sandwiched in between Larry the Lamb, and The Lone Ranger, a childrens film foundation movie from 1976, called the Night Ferry" - oh goodness, where do i have to live to have that on teevee? In zoviet france? found a 3 minute snippet of Night Ferry on u-tube, looks like good clean clapham fun...ah, i see - sky channel, isn't that run by that old fucker Murdoch?

anyway, if they as well have robin hood (the b/w tv-serie) or catweazle, i try 2 find myself access for some serious time travelling no matter wot u think of fuckin' cratedigging for analogue soundfiles.

Dear Anonymous 1,2,or,3?
This channel is the only channel i watch nowadays...you'll be pleased to know that Robin Hood is on saturdays.....waiting for Catweazle,but will certainly appear.
I get up to watch the Childrens Film Foundation movies on saturday mornings,hangover or not......."Get the Kid!". I always admire the shite pointless capers that the crooks try to pull off,and there's alot of trying to get the booty out of, or into France for some reason!?....spotting future stars is always a laugh...Phil Collins turned up in "Calamity The Cow" the other week.
So there's the Prog connection to help this chat fit in with the current posts.
https://youtu.be/iwruSUZg46I

Geographically maybe but politically is was captured by the North Vietnamese army and technically occupied by the north since 1975. Nyuk Nyuk Nyuk