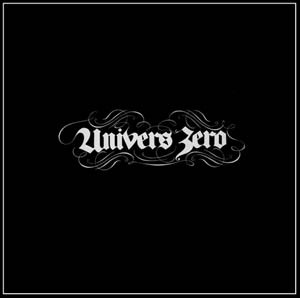 Another tenuous Rock In Opposition moment beckons:
Never one to stoop to revealing the bleeding obvious, my hand has been forced to introduce everyone to the band they've always known about....yep...It's Univers Zero....but have you listened to them all the way to the end of side B? If you have then you're either pretentious or narcissistic loner...luckily i'm both,and i've listened to this and the 2nd album all the way through,and felt like an emptied bowel afterwards.
They're kinda an Electric Light Orchestra for failed music students who wish they were in a Doom Metal band....which apart from Black Sabbath,didn't exist until the late 80's.
When a bunch of angry young doom-mongers find each other in the Conservatoire during lunch hour, and one, if not more, toys with the idea of merging Stravinsky with Czechoslovakian folk and.....the PROG word.Some unaccredited wag you wouldn't want to be in the same town as said this...."Like Sorabji's symphonies gone wrong"(I bet he's a barrel of Laughs)....for fucks sake, does anyone know who Sorabji was/is...please don't answer that, I can google too,but prefer not.
Don't you just love it when some bright spark thinks a progressive idea is to merge lots of different genres and hopefully come up with something 'new'? So unadmirably eclectic isn't it?
Genre-wise they managed it, and no mention of Peter Gabriel or David Byrne in earshot..."Chamber Rock" some idiot called it.....not much rocking here though, it's all a bit Jive Bunny plays Bartok with Bill Bruford on drums instead of a TR909. When someone whips out an Oboe or a Basson, you know you're in trouble, they're either showing off or desperate.
Of course I'm being willfully facetious here ,that's the role of this character i have reinvented myself as innit?
This record festers on your turntable like a portal into the dark European soul that us anglo-saxons are so distrustful of...the sound of Putin's mind. It's almost that frightening.
This was Chamber Rock's "Smell The Glove" moment, a black cover that you could see yourself reflected in both sides. Human kind's black heart as released in the Punk Rock breakthrough year of 1977.....only in Belgium would....could, this happen. They would have been arrested in most Iron Curtain countries for spreading fake news about the human soul, or lack thereof on planet Earth in 1977. And the anglo-american rock fraternity just pointed and laughed.
Like that other Oboe brandishing 'rock' group , Roxy Music, they inadvisedly reformed after splitting up for a decade.Losing the magic as did Roxy,slideing down the alippery slope in Armani suits and white tuxedo's as if in a Glam Rock "Jeux Sans Frontiers"*....Somehow I'd quite like to see Univers Zero performing in White Tuxedo's on "It's a Knockout".(Only on this blog can you see references to 'Its a Knockout*,Stravinsky and Sorabji on the same page).Now, that's Irony?In some ways British TV could effortlessly churn out endless amounts of surreal TV art in the 1970's,that was probably even weirder than Univers Zero could ever hope for.....who needs Salvador Dali when you have convicted Pedophile Stuart Hall ably assisted by Eddie "it's an Up and Under" Waring in Ely 1973? (in Syd Barratt Country)
There was an equally sour listening experience awaiting in the second album.....party music this ain't,unless you're a contemporary dancer?...Which is the only form of Prog Comedy that i can really laugh at! Who says these crazy Belgians take themselves too seriously?...everyone.
PS..this was later called "1313",which was the catalog number, to avoid any confusion.....but didn't Lydia Lunch have an album called that too?......oooh i dunno, everything's been done innit? At least twice in these over-exposed days has it not?
* kind of an early version of the European Union...if it stayed like this there would have been no Brexit.
Tracklist:
1.Ronde 14:45
2.Carabosse 3:40
3.Docteur Petiot 7:25
4.Malaise 7:42
5.Complainte 3:18

DOWNLOAD to feel down HERE!
Posted by Jonny Zchivago at 15:59

Dude, Sorabji was freakin awesome! There's basically only two guys who perform his music, and fans of the one guy invariably loathe the other guy--and vice versa. Seriously, they ceaselessly pore over the recordings and point out all the places where the loathed player allegedly flubs a note. I've listened, and I've imported the tracks to DAWs and play em at 1/2 or 1/4 speed, and I simply don't here these flubbed notes. But then, I'm an idiot, so who knows?

Also: "Chamber Rock's "Smell The Glove" moment" Totally! If you check out the photo of Henry Cow inside the gatefold of Unrest, THIS is what _those guys_ should have sounded like. (Not that I have any problems with Henry Cow's Unrest, it's just that the photo of the band doesn't match the content of the record.) Though the photo of Univers Zero, with the harmonium dragged out onto the lawn, isn't too shabby either. They shoulda been the band in Bergman's "Seventh Seal."

LOL!...I think i remember walking into a trendy bar in Brooklyn once and hearing the phrase "Dude, Sorabji was freakin awesome!" as i walked in!
I was ready with my bluffers guide to Kant just in case i was set upon by a hoodie wearing amateur philosopher. I can just about hold my own on Prog, but early 20th century Classical ,i have to bluff and bluff hard.
I think Fly Pan Am was the band playing that night.....i knew i was in trouble when one of the guitarists said in conversation....Hey man, Syd Barratt was a genius. He went to speak to someone else when i drew a sharp intake of breath at his casual use of the 'G' word.
I will have to check out this Sorabji chap.

Indeed, image wise, these types of band fly in the face of sartorial style.I can't help putting image on the same footing as the music because basically I'm a Pop music type ain't I? Crap clothes crap hair, and my interest wanes;especially if it doesn't match the music. The Magic Band and Trout Mask are a perfect example where the band image matches the music....i suppose CB was an artist after all...aesthetics first.

Just listening to Sorabji: Sequentia Cyclica as played by Jonathan Powell...and yes its freaking awesome! By the end of its 8 hour tenure, I might just be swinging on the end of a rope,smiling.

With Sorabji, the piano and organ symphonies are where it's at. They're actually pieces for solo piano and organ, but the voicings and harmonies and something or other are intended to _evoke_ a symphony orchestra. And it actually kinda works, but then I'm the person who insists that this one piece on one of John Fahey's Christmas albums is akin to a drone, or maybe a bumblebee, slowly flying around a Christmas tree and it occasionally drifts downwards towards this Lionel train which also circles the tree, and then it swoops back upwards towards this Little Drummer Boy ornament hanging from the tree... and so forth. Yet I've played this track for a number of people and no one else seems to "hear" all of that.

Daniel Higgs, both with Lungfish and solo, has always gotten the image/music thing. There used to be a video for this partiuclar performance that's disappeared, but if you listen to this live version of "Hoofprints On The Ceiling Of Your Mind":

and just use this:

as the accompanying video, it's almost perfect.

Jonny, that's pretty much how I thought you'd feel about UZ, and why I recommended them to you.

My take on rock history is simply that, knowing itself to be mongrel ("The blues had a baby and they called it rock'n'roll"-- and American country music has always acknowledged paternity) rock did its best to winnow through every other genre known to man in search of hooks. For example, rock with oboes dates back to a hippie era group called the New York Rock & Roll Ensemble, with a long haired composer named Michael Kamen, who grew up to do the orchestrations for The Wall. Eventually I figured out that the real reason for the World Beat category was that the industry had so systematically strip-mined all Western musical forms that gamelan gongs and throat singing were all they had left.

Also, I always knew I was gonna find something truly amazing in your blog, but I figured it would be something more like a band of teenage Mancunian introverts with Ataris and syndrums sounding like Wire circa 154. It turned out to be an obscure 20th century composer.

Ya know, I was thinking last night UZ was the logical next step. The idea of Samla sharing a program with these guys and In Praise of learning-era Henry Cow sounds like such a cluster fook. Feeling like an emptied bowel afterwards only makes sense.

Unbelievable. Thank you, Anonymous! That's the version of Hoofprints I've been searching for--viewed all of 300 times over the past 12 years.

An awesomely dark group in their day. They really did suffer for their art by all accounts. The use of harmonium and bassoon evokes 'And Soon The Darkness', France-set but close enough for Low-Countries Prog. The photos depict a Marc Dutroux study group.

Fanny Fanny Fanny! It may have been unfanny but Telex were tekking the piss.
also
Fun Eurovision Facts: Telex ACTUALLY WANTED to finish last...but finished 17th.They were on course to be last until Portugal gave them 10 points. Morocco came second last in their debut appearance, were very upset, and have not participated since.

I was playing this album, and the next one, and my kids said, "That sounds
like the Lost in Space music..." (60's US TV series)

Also, their most recent album is very nice. More canterbury. quieter. Grows on you.

@northfiieldhat....luv-a-duck...you're in at the deep end ain't cha? A recent VZ album!?
But good to see some references to american cult TV...will have to compare and contrast the soundtrack with UZ lp 1+2.Maybe that's where they nicked the idea,instead of stumbling upon it during recess at the Conservatoire? Then they bought some black clothes.

!st season of Lost in Space - black and white episodes.
And new UZ album is Univers Zero – Phosphorescent Dreams,
from January of 2014.