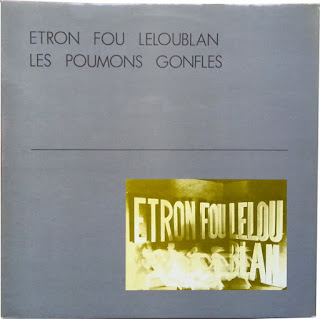 Okay, it had to happen,the french drummer bloke who was in Les Batteries,Guigou Chenevier, gained his fame from playing les batteries in the Rock In Opposition monsters, Etron Fou Leloublan......rolls off the tongue doesn't it?
Rock In opposition,or RIO, is really a more marketable title for Prog Rock of the more Avant variety,which became yet another category after Henry Cow's original RIO festival during those crazy punky rock years of 1978 upwards.So an obvious Punky influence was absorbed into these Avant-proggers repertoire.Shorter,opinionated and angrier versions of the progressive type. Quite a few of those post-punk chaps would have fitted in quite well methinks,but the clothes were bad,so they kept away.
Weird time signatures, played by a drummer sight reading music from a lectern positioned visibly by the Hi-Hat to show the dangerously hippified audience that 'we ain't just making this up y'know!'
Etron Fou Leloublan do all this stuff,ticking all the RIO boxes,but bare in mind that these groovy garcons are indeed French, so you should expect some of that 'orrible screechy shouting that their pallets tend to enunciate from time to time through no fault of their own.I blame the parents....who were probably Artists and as a consequence of this delusion,also bastards.
Anyway I chose this album, because it has a song called Nicolas on it, which is my real world given name,and having spent a week in a French hospital once with a collapsed lung,"Les Poumons Gonflés"(the inflated lungs) has a special ring to it.
Tracklisting:
1.Nicolas 4:06
2.Mimi 2:58
3.Exposition Universelle 1:41
4.Nicole 5:42
5.La Musique 3:05
6.Christine 6:46
7.Those Distant Waters 3:24
8.Upsalla 2:05
9.Io Prefero 4:29
10.Pas L'sou 3:11
DOWNLOAD without opposition HERE!
Posted by Jonny Zchivago at 11:27

Damn, there's a desert island disc, off the coast of southern France in this case. Merci Nic!

Yeah, it's an amazing record! Way different from their old neo-beatnik sound-- contrast the live album's version of "Christine" with this post-punk juggernaut! Did you notice that Fred Frith produced? They returned the favor by being his backing band on his album Speechless.

The Rock In Opposition tag was deliberately provocative, of course-- rebellion is always a viable marketing strategy. But there was some truth in it: each of these bands perceived that they were out of step with their national rock culture in an important way. Henry Cow's incisive version of prog was never gonna sit comfortably next to the fantasy worlds of the likes of Yes and Camel, not to mention the fact that by 1978 punk was the flavor of the month. To some extent, this was Sweden's problem with Samla Mammas Manna too; their sound was getting edgier and more dissonant. Italy had two parallel teen cultures, leftist and rightist, and Stormy Six identified as leftist-- but as soon as they started to make it, they observed big left wing headliners acting just as entitled as princes. Belgians lead the world in per-capita Valium consumption, so they were never gonna be comfortable with Univers Zero's goth-prog.

Etron Fou's basic problem was much cruder: the French culture industry is overwhelmingly based in Paris, so it's appallingly difficult for acts from the provinces to get any exposure. They can deal with Magma, weirdly Teutonic and singing their Wagnerian epics in an invented language rather than French, but Avignon's Etron Fou is somehow beyond the pale. So Etron Fou kept jockeying for attention through daring adventures like setting out on a D.I.Y. American tour or, later, booking a gig in the Eiffel Tower. And still nobody gave a hoot.

And the name translates as "Mad Shit, the White Wolf"

Yeah mandolinny, i think Frith produced two or three of their albums,and played on them too.He spreads himself rater thinly does Fred.

While I agree that I can't keep up with Fred's profusion, I do think he has an enviable knack for introducing some random factor that opens up amazing new possibilities. I enjoy Etron Fou albums generally, but my favorites are the two Fred produced. (The other one is their swan song, Face aux Elements Dechaines, on which there is no saxophonist.) I also really like the record by Fred and Ferd (ex-Etron Ferdinand Richard, playing "rhythm guitar" on bass) called Dropera, but I wouldn't recommend it to anybody who isn't already a fan.

I think it's fair to say that the Fred Frith projects I like best are the ones where there's an actual group involved, and everybody's pitching in with ideas: obviously Henry Cow and Art Bears always raged, and Skeleton Crew with cellist Tom Cora was ferocious, especially on stage. Some of his soundtrack projects can drag-- but that's listening to them as records; maybe they do a better job of illuminating the visuals, which is what they hired him for, I suppose. And I kinda stopped buying records (anybody's, not just his) around the time he became a college professor.

Glad someone else has observed that about Fred: if it's not a group--or just Fred with guitar on table--it just doesn't seem to work as well. That said, I've known a number of former students of Professor Fred and they were mostly doing interesting stuff, so I figure he still must be doing something right. Can't really say the same for people I've known who attended Juilliard--I feel like that place must literally beat the musicality out of people or something.

saw fred playing solo guitar at noted sydney trad jazz club 'the basement' sometime in the early '90s. said gtr playing included viciously beating the thing a hairbrush and pouring uncooked rice over the strings and pickups with it cranked up to eleven thru a fender twin reverb howling with feedback. this had the dining jazz snobs seated at the front choking on their martinis and stuffing the prawns from their appetisers in their ears. wonderful. later on got talking to him while having a smoke outside the venue, we had a good laugh about it and fred said he would much rather have played a rock dive.

If i ever had any Trad Jazz inflicted upon me i'd be stuffing prawns in my ears.Maybe Fred could have tried throwing prawns at his guitar?

Love this record, but the followup (Les Sillons De La Terre) really blew me away. Maybe it was the order I heard them in, I don't know.