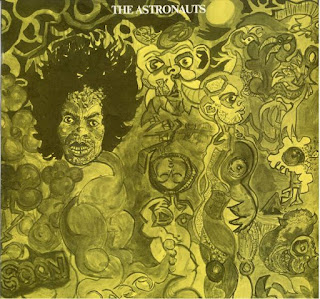 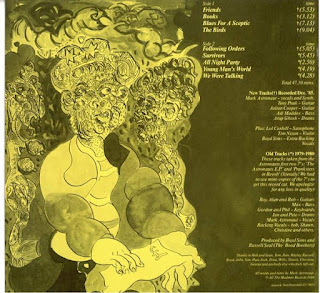 "Who d'you fink you are?.....Lol Coxhill?" once did say Johnny Moped as Xerxes whipped out a saxophone. One of the many great quotes from the as yet unwritten Bible of Rock'n'roll.
"Who do you think you are?....Lol Coxhill??" (note the better spoken style text).....once did Mark Astronaut sayeth,not!
"Er...Yes",spake Lol Coxhill,who actually did appear on the first half of an Astronauts album.
The 21st century version of his name, a contraction of Lawrence, now translates as "Laugh Out Loud',but nobodies laughing anymore. What this versatile master of the UK improvisation scene,and erstwhile member of the London Musicians Collective is doing on an album by semi-legendary anarcho hippy folk punk UK DIY band from Welwyn Garden City, otherwise known as The Astronauts, is anybodies guess;but check the record,check the guys track record;he put himself about a bit.....he is most definitely NOT appreciated.(Note the clever Fall references).....as is not Mark Astronaut himself.
Personally, i'd remove most of the sax wailing from the mix if I had the chance.
This is one of those records that you'd like to remix.....this'll be fun.......such as......I'd turn up the phasing on "Strictly Personal",remove the string sections from Bryter Layter, re-record the drums on "Loveless" and replace those sampler tone wheel guitar things with the real thing. I'd also erase "Bat Out Of Hell completely,and that sodding Gun'n'Roses LP too,no lips shall speak its name.....not so much a remix in those cases, more like retribution for past evil unleashed....not yer proper Evil either,a special shit kind of Evil.Erase them from history please Satan for devaluing your kind legacy,or give us the power O lord and master,and we shall skip joyfully into the flames.
In fact, if ever there were two albums that Lol Coxhill could have guested on it should have been those two atrocities.
Only when something's gone does one truly appreciate it's previous existence. And i'm not talking about Bat Out of Hell and that other one...oh yeah Bat Out Of Hell 2 ...I'm talking about The Astronauts ain't I? Since the noble DIY hippy-punk himself Mark Astronaut bought a one way ticket into infinity a couple of weeks ago.
So forgive me if you wanted more Rock In Opposition obscurities ,this is a much delayed tribute to the Bard of Welwyn garden City.
I do have the enviable quality of being a fickle and shallow hypocrite,son't you wish you were like me?
Said with no pretense of pride,I admit to being a bit hard on The Astronauts in the past,in fact most of the Anarcho-Punk scene.Over the past 13 years of this blog,I have slowly shifted my attitude to that trustafarian army......it's all grown on me hasn't it!? The Mob and Rudimentary Peni,were always a subject of my fickle admiration. Don't misunderstand me, the soapboxey nature of the sickening self-righteousness still makes me wanna vomit,but I have projected it all in a pissy yellowlight of charm for oneself. I now find myself thinking "Awww bless 'em" whenever Flux Of Pink Indians tells me of the horrors of a nuclear death....again!Even Crass...."AWWWWW Bless their little black cotton socks".
The Astronauts have been elevated over the years into the Mob/Rudimentary Peni division,having won on penalties in the play-offs......The Subhumans lost again,joining Zounds pressing for promotion from the 2nd tier again next year.
Now I listen joyfully to The Astronauts as a great lost Pop Band,in the same way as i was slowly converted to thoroughly enjoy REM.(!Guilt wot Guilt?) Funnily enough both groups have a certain Folky quality that i find rather appealing.
The Astronauts have gigs booked until October I notice.....sadly these will have to be fulfilled on the Astral Plain,as Mark succumbed to his own debated mortality......yet Bono lives!
NB:
This album consisted of some new material (A1-B1) and re-release of old tracks (B2-B5) taken from the original singles (literally, as the masters had gone missing).
New material recorded Dec. '85.
Old tracks 1979 - 1980.
Tracklist:
A1 Friends 5:53
A2 Books 3:12
A3 Blues For A Sceptic 7:13
A4 The Birds 9:04
B1 Following Orders 5:05
B2 Survivors 5:45
B3 All Night Party 2:40
B4 Young Man's World 4:19
B5 We Were Talking 4:28
DOWNLOAD as soon as possible HERE!
Posted by Jonny Zchivago at 01:19

That was the thing about Lol, in what contest DIDN'T he fit? Where wouldn't you be glad he showed up? What sort of music wasn't improved? On top of all that, 'e was a nice bloke, whaddn't he?' "Who d'you fink you are?.....Lol Coxhill?" Would that I could.

What you said. Yes. also, REM's 1st two albums, and then
all their dark songs, like "Feeling Gravity's Pull". Joe Boyd did produce for them, no?

Indeed ,Joe Boyd did produce REM...and they survived decent into madness and/or an early death, which was relatively common for Artists Joe got his hands on. Barratt,Denny, Drake.The incredible String Band became Scientologists to escape his curse.

Improviser or improver, where among these two pillars did he fit that lol Coxhill geezer? Usually he adds something ....but on this album it sounds like they found a discarded Courtney Pine 80's nu-jazz session and plonked it over the top.You can't get it right all the time.

I see. I s’poze it isn’t a surprise that at some point groups would want Lol sitting in in an attempt to gain some level of credibility. ‘ey look, we got lol cox’ill on board.’ Neither lipstick or a highly regarded improv tooter can help a pig that's particularly gruesome. Haven’t had a chance to hear this one yet. I’ll have the inner ear armor on hand as needed.

I know Lol's on this, but does anything here approach the brilliance of Subhumans' "From The Cradle To The Grave"? Minimal talent inexplicably start playing prog and the results are... spectacular?! I digress, but I'll listen regardless. For somme reason I always thought this band more akin to Here and Now, who never seemed to work unless they had Daevid Allen on board.

Very great! Thanks so much for posting. Had never heard, and I've herd errything. x https://louderthanwar.com/rip-mark-astronaut-passes-away

Thanks for the (as usual) great write-up. I have The Seedy Side of...The Astronauts if anyone is interested. But mostly I wanted to say thanks for the recommended record of the week; Thee Outside - Deaf Disco (Jonny Z). See why this made a few quid...good stuff...Leary & Burroughs sound-bites as well.

Finally, someone that acks that Kirby's arr on Bryter Layter sucks, thank you, Hip Priest. It should have been Van Dyke Parks, if anyone. - Magnus.

I'd also erase the strings on Five Leaves Left too..Drake would agree.....and all the strings on Sandy Denny's solo albums, especially the ones produced by awful hubby Trevor.....yep i don't like string sections on pop records in general.....there are exceptions, maybe Van Dyke Parks...for some reason i'm thinking Jimmy Webb?

Jimmy is always good, although perhaps more for baritone types, say Scott Walker. Let's take all the strings away, like on Pink Moon, keeping Nick safe? Agree with Sandy too, what's the verdict on Bridget St John, she seems to have been surrounded by bad advisors throughout? Argh! - Magnus.

Ask me No Questions Magnus!...was her best Lp..No strings or flutes and recorders...produced by none other than John Peel,who was responsible for that fantastic nature collage at the end...but album no.2 , had some tasteful strings and flutes etc,that kinda enhanced the darkness a little bit,dare i say her Baritone darkness?....Jimmy Webb missing in action here...But Her advisors may have heard the gossip about how Boys was pulling his blonde locks out with Drake insisting on no strings for Pink Moon.So the third Lp was back to basics...jolly good.
Lp 4..was on Chrysalis so forget it.
When asked who my fav guitarist is, I usually say Nick Drake,such strong fingers the lad had....then i come in with Wilko Johnson to help them understand.
The Joe Boyd curse did for Nick and Sandy and Syd...the guy was clueless imho,..how anyone could manage to fuck up Denny's career with such ease is unfathomable. luckily we have Sandy's demo's these days to show what might have been....and the BBC sessions by everyone....if that isn't a reason to never dismantle the Beeb then I dunno what is.
Could talk about Uk Folk/Folk rock all night....Bad Advisors!Aargh indeed!

With ISB, I confess the scientology phase fascinates me. The vocal chances they take, not by choice, but by sheer incompetence to hold a tune, are mad (in the good Blinko sense of the word). Boyd's book is a good read although not for the reasons he thinks.

In agreement about raw versions being preferable from all the artists you cite and lots of love for Peel but the Bridget rap about insisting on her own room on one of the radio sessions you shared is not to his credit. He wasn't drooling over Kevin Coyne, insisting on room sharing, was he? Nosebleed would have resulted, no? - Magnus.

Have you seen my Scientology posts?
https://dieordiy2.blogspot.com/search?q=scientology

Sandy Denny was a Scientologist for about three days,until Trevor found out that she'd gave all her money to them, and went round their HQ threatening everyone until they gave it all back....he had his uses.

I don't have much great luv for Peel, he was a perv by modern standards,but his shows remind me of my youth, so there.... sorry to all the statutory rape victims in the uk and Usa....something he was openly proud of..see his auto-biography, and listen to the many occasions on his shows when he refers to his school girl conquests.....it was a different era i suppose?
I bet the ISB got their fair share too....as did all the 60/70's pervs.

Yes, I have seen all your posts. Some hurt, like the Scientology ones, but you're an educator and they usually hurt you at times, or you're not learning. lex Cornelius Cardew, hehe.

About Peel, I so loved it when MES got the question on what we wanted to say about the man after he died and MES said he didn't know him. Bless you Mark, I didn't know you, but forever may you be the new face in hell! - Magnus.

No Pain No gain Magnus.
Jean Paul Satre once visited Andreas Baader in prison,and came out with the opinion that he was a bit of a Twat!...Wikipedia's translation from ('Quel con'). I ain't no Jean Paul Satre, but Cornelius Cardew was also a bit of a twat too....similar politics too.