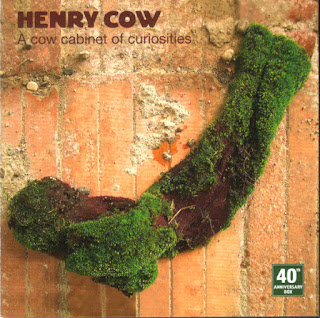 All you lot already have all the Henry Cow albums right?...bit of a shit band name really innit?
Never liked portrayals of socks either.
Just the name 'enry cow invokes within me the whiff of patchouli oil joss sticks and ethnic art objects;not because 'Enry were a bunch of smelly hippies,quite the opposite...almost.....the basement shop that i first encountered album sleeves with unpleasant reimaginings of socks aboard was situated underneath the most unashamedly Hippie apothecary in post-punk Leicester....the "Very Bazaar"...geddit?....Underneath the whiffy smokey atmosphere of street level Very Bazaar,lay the only place in Leicester you could buy Whitehouse records,Recommended Records, Half Japanese, reggae Dub 10 inchers,The Residents  ,and Henry Cow!?.... When i got my first Dole Giro, to the value of 32 quid...I cashed it in, got on my Bike and went to the subterranean Very Bazaar record shop,with its matt black painted brick decor and homemade record racks.(the upstairs bit still exists!?)A bit as i imagine a gift shop run by Crass would have looked. The record bit was ran by an amiable mustachioed chap called Steve,and Lydon's mate ,Jock MacDonald's brother Martin,who loved Lynard Skynard previously, before he encountered johnny Rotten in the Pub next door to the shop (the Globe),then suddenly he became a Punk Rocker overnight.The record shop also became a one room Bollock Brothers tribute ,as brother Jock was a member.Last i heard of Martin he was wanted in Greece for drug offences,and was running away to hideout in Ireland.
Anyway, I digress;on giro(my benefits cheque) day,I came away with, the Cravats In Toytown, This Heat's Deceit, Metabolist "Hansten Klork","Whitehouse's Dedicated to Peter Kurten in yellow vinyl, and Henry Cow's "In Praise Of Learning". I think there may have been a Pink Military 12inch in there too.....ah blood and lipstick.And i still had two quid left for a lemon split bun and an ice cream soda,how punk rock is that(?) from Brucciani's....RIP!
So,as you lot have already got everything by 'Enry, here's that limited edition bonus disc from the 50th anniversary box set thingy, which you've already got of course. If you haven't i might upload the box set with an iTunes style bit rate of 192k,'cus it's massive and i'm running out of storage space.
Here's a 1972 style review of the album to finish:
"Track one sounds like Soft Machine,but the rest doesn't."
Notes:
Tracks 1 & 2: recorded in our rehearsal place probably in 1972
Tracks 3, 4, 5 & 6: extracted from a forgotten tape I gave to Steve Feigenbaum in 1978. The original recordings were presumably made on cassettes run from the mixing desk.
Track 7: out-take from "In Praise Of Learning" mixed by Tim Hodgkinson at Cold Storage in 1984.
Tracks 8, 9 & 10: recorded at a public concert for NDR Jazz Workshop, Hamburg on 26th March, 1976
Track 11: recorded at a public concert at the Sendesaal, Studio F, Radio Bremen, on 22nd of March, 1978, for New Jazz Live.
Track 12: extract from an Unrest out-take mixed by Tim Hodgkinson at Cold Storage in 1984.
Tracklist:
1 Pre Virgin Demo 1 3:55
2 Pre Virgin Demo 2 1:02
3 Unidentified Improvisation 1 1:30
4 Unidentified Improvisation 2 5:37
5 Unidentified Late Composition 2:04
6 Exploded Amygdala / Teen Introduction 3:37
7 Lovers Of Gold 6:29
8 Hamburg 6 5:33
9 Ruins Extract 8:24
10 Hamburg 7 9:44
11 Half The Sky 5:03
12 Extract From The Glove 2:19
DOWNLOAD and hear this crazy moozic straight from the cow's mouth HERE!
Posted by Jonny Zchivago at 12:58

Why are record store memories always so fascinating? I suppose it's the idea of stumbling upon some truly crazy shit (etron fou), with lasting impact, all on one's own. When the final Henry Cow came out, I would've still been watching those Lost In Space reruns--and probably was still terrified by the opening notes to the theme song. In a few years I would stumble upon Western Culture, and while it wasn't viscerally terrifying, it was still something. And this was the latter part of the 80s, when all such things were criminally un-hip, so... even better. But to be able to hear something like UZ's "La Faulx" (from Heresie) as a five or six year old? BBC Radiophonic Workshop excelled at the rapid transient, sound bit shivers, while all these sorts somehow sustained those feelings over prolonged stretches.

Believe it or not, there are people out there who don't find record Store memories fascinating!? And think the BBC Radiophonic workshop was a pile of shite, and don't watch cult TV????
John Williams finest work is Lost In space (the 60's version of course)...oh ok...the Jaws theme takes some beating

Yeah its true, I was always alone trawling through these weird emporiums of mystery....i was lucky to have a couple of prog record stores in my town...when i went into the ultima thule store by the rail station. I had one or two non like minded friends by then in then 90's....i remember a mate asking what this tune was they were playing...they loved these moments there...a lop sided smirk would appear before the answer to their query was slipped out...."Hamburger Lady" steve the shop owner said "....by Throbbing...(pause).... Gristle,have you heard of them?
erm...yeah...but i haven't got that one yet! It was a bit like the shop in Hi-Fidelity again...but a prog music hi-fidelity....may be a book in this?
The bargain bucket was great there.....lots of polish Folk,and iron curtain Pop.....nearly all free if you bought something else..so my friend came out with TG's DOA and a bunch of listenable rural Romanian Dance music....which he reckoned was good???

Record stores are such mixed asylums.

I originally thought R.I.O. was Rock in Obstetricians because
my sister's gynecologist passed a kidney stone

I thought it (RIO) was an acronym for Brazilian music.....not entirely untrue but the thought still passes my mind to this day.

I still have a shiny metallic Death Disco poster I bought in that subterranean shop. It was printed on such heavy cardboard that it needed practically a whole packet of Blutack to keep it on the wall. Completely ruined the woodchip. My mum was livid.
Anyway, cheers! Andy

So it was you who got that was it!????.....that most probably came from PiL HQ in Gunter grove sw10.
Woodchip isn't the best surface to use blu tack on.

Hi! Like they use to say on the radio...Here is a long time listener, first time caller ...Thank you for keeping this kind of incredible music alive. I'm pretty sure a lot of these artists probably are now having a "normal" 9 to 5 job (or worse), so keep up the good work and keep their memories alive! Fortunately Fred Frith and some of the others or still making some noise but even for them your website is a great way to get some extra exposure. The boxset (even in glamorous lo-fi) would be a great listen for many of us. When you running out of storage space because of Henry Cow...well, there are worse ways I guess...Cheers!

Hi there pop picker.as the twat that was on radio one used to say....alan freeman?...he was an idiot. he liked Rock music he said.
Most of Henry Cow carried on making nutty music...the only jobs they had were lecturing jobs,which is a total doss.
I'm sure this music would live on without me....but i'm beginning to doubt it.
As far as i'm concerned Henry Cow is stadium rock in levels of poopularity. Or am I a victim of my own ghetto?....the only music i really enjoy 100% is Pub Rock and original wave Punk...is that anything to be ashamed of?
In my opinion, Dr Feelgood, Eddie and the Hot Rods,Slaughter and the Dogs, Johnny Moped wipe the floor with Henry Cow for unadulterated natural weirdness