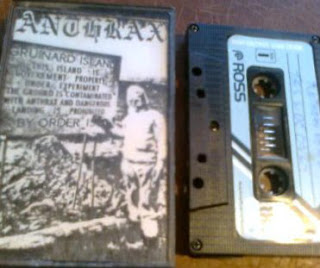 From what doth an Anarcho-Punk band maketh? Asked one of Shakespeare's rival poets back in 1982.
Anthrax........naaaaaah not that awful speed metal nonsense Anthrax from the United States of pointlessness....Anthrax from Kent you Kant!
Well,as I was about to say before I rudely interrupted myself pretending someone actually reads this drivel, or cares,....take 3.....Anthrax,were often lumped in with the Anarcho-Punk morass,but musically they had far more in common with the 'Oi' bands,or UK82's upteenth wave punk. Most crass-alikes couldn't achieve that sub-metal sound necessary to be the Exploited,so they just played open chords and painted banners,whereas Anthrax could actually play proper Punk Rock,like a yobbish Rudimentary Peni but without the gloomy imagery.
Anthrax had songs about Vivisection,anti-war,and anti capitalism;plus they had home made banners to be a backdrop at gigs....usually with anarcho-punk bands.They also had a single out on Crass Records, so therefore they were gleefully accepted as Anarcho's.
No joke, but I had an auntie whose surname was Waugh....Auntie Waugh!? If she was hip, she could have been in The Poison Girls,or on Penis Envy.
Anthrax,however, managed to write and record one of the absolute classic singles from the 'third' wave of UK Punk in "They've got it all wrong",demo version included here.Released on Small Wonder to add to the legend.
They did the accepted thing in 1982, and recorded a Demo,knowing no-one would release it, and released it themselves. Copied onto top quality Ross cassettes,remeber them?....no?... me neither,and decorated with a photo of Gruinard Island where the British Government tested chemical weapons in World war Two,one of which was....you guessed it,or you gassed it, Anthrax.
'twas finally decontaminated in 1990. Unlike Anthrax ,the Uk punk band,who reformed in the 21st century and made a new album!?.....a big no-no that,contaminating the legend,no to mention looking like a bunch of punk dad's at a punk Darby and Joan club, otherwise known as the annual Rebellion Festival in Blackpool.
Tracklist:

1 All The Wars
2 Capitalism Is Cannibalism
3 Exploitation
4 Vivisection
5 P.P.B.
6 Introduction To War
7 They`ve Got It All Wrong
8 Violence Is Violence
DOWNLOAD some decontaminated anthrax HERE!
Posted by Jonny Zchivago at 21:58

If you had a massive aquarium and you put it in space and then you took the aquarium away so its just a glob of water and there's a fish in it, does the fish know its in space?

The fish knows its fate for a nanosecond as the water and the fish instantly vaporize in the near vacuum of space. And the fish wanted to tell us that Space is indeed not a vacuum,but full of elemental particles.So tell your smartarse christian friends that something DIDN'T actually come from nothing.....and add that we humans and chimpanzees evolved from a common ancestor that wasn't a monkey along two different branches of evolution,and that's why there's 'Still Chimps'.....in fact they usually say why there still monkeys (normally no 'is'),but i couldn't bring myself to write that.
Thank you for your stimulating hypothetical notion.

I bought a box full of Ross cassettes real cheap at a market in Great Yarmouth in the early 80's. Most of them got chewed to buggery whilst attempting to record my aunties punk albums. I think only 5 cassettes out of 12 actually worked.

I think that Ross cassettes were also one of those market brands whose c-60's only ran at 58 minutes in playing time,and recorded in monaural left or right because the tape was light on iron oxide. Then they either stretched or snapped. Them was the days.