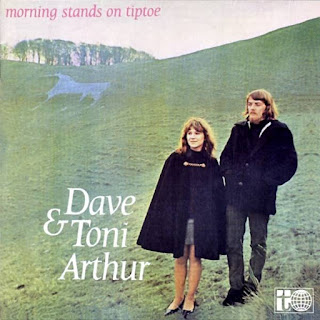 The first part of the holy trilogy of Dave and Toni Arthur albums was this classic on the fashionable Transatlantic label......it didn't sell of course, and they got dropped.....which should be the ambition of all serious musicians.
Pictured here,in the obligatory pose donning the proceeds of a record company funded trip to Carnaby Street.We find our hero's near one of the many ancient chalk carving's of Horses dotted about the English countryside.It's likely that they've never been to the countryside before.....Tree? What is Tree?
But as is more likely,and very prevalent with most late sixties Folkies, they had actually seen many trees in the leafy suburbs of London where they grew up. The early days of the Folk revival was mainly influenced, sartorially,by the Beatnik preference for unwashed sweaters with holes in....not attractive to yer average record buying punter. Also,dressed in their kings road finery would have not gone down too well in the Folk Clubs of northern England, where The Watersons, Anne Briggs and A.L.Lloyd ruled the roost.South of London was the same problem,with the puritanical Copper Family,...oooh it was a hard life being a suburban Folk Singer.
"Come taste my apples and pears kind sir" sings Toni.....Gawd Blimey ,will you please excuse me for a minute kind sirs.....!
Ahhh,that's better.I'm back, and relaxed.
There be a rendition of the classic hunting song from which influential posh peado (fully documented in his biography) DJ John Ravenscroft,he from the leafy suburbs of Liverpool, got his show biz name.
I'm not sure Dave and Toni got to do a Peel session,but young John was certainly very into this new wave of folk,as was evident on his radio shows from the era.
All three of Dave and Toni's album are indispensable classics of Neo-sixties Folk,and recognition is due.They got the Thumbs up from A.L.(Bert)Lloyd anyhow,and he was doing this since the 1940's!
This stuff all suggests that romantic idyll of an unattainable "better,'sustainable', Way Of Life" to us of the bourgeois in denial crowd.If these songs are recycled,so must we the plastic in tribute to the old ways.....yep....we're still DOOOMED!
Tracklist:

A1 A Maiden Came From London Town
A2 Morning Stands On Tiptoe
A3 Female Rambling Sailor
A4 Padstow Drinking Song
A5 The Guilty Sea Captain
A6 The Eynsham Poaching Song
A7 Green Grass
B1 The Barley Grain For Me
B2 The Jolly Ploughboy
B3 The Blackburn Poachers
B4 John Peel
B5 Bold Robinson
B6 Green Broom
B7 Bendigo Champion Of England
B8 The Football Match
DOWNLOAD on tippy toes HERE!
Posted by Jonny Zchivago at 09:23

Three brilliant albums! Thank you so much!

The heroine of Play School and Play Away. God, I fancied her rotten even though I wasn't quite sure what was going on. Getting the pre-pubescent horn watching Play School? I always was a weird fucker. But, dya know what? I still would!

Thanks. I can usually track down an album with my googling skills but I had given up on anything but the odd track by these two. I don't know how you do it but keep doing it.

Hey man - if you're grooooovin' on all this ancient Hippie Folk Stuff, you should check out Espers. They were a band from the Philadelphia area in the early 00s and they were super excellent. Also super excellent are the people the singer from Espers (Meg Baird - whom you should also check out - voice like an angel) recognised as her influences - The Trees, Pentangle, and Burt Jansch. Cheers!

Dr Tonka.....Espers, are more like a Uk Folk Rock tribute act,they even dress like they live in 1970.Very nice but whats the point?

The badgerstump....Phwooooar! My mother was concerned i might be heterosexual.