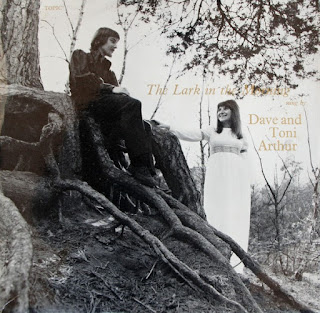 Oh No! Not more of this hippy folk shit!? I hear you exclaim!? We want to hear some Punk Rock!
Well, for one, this has got Toni Arthur from Playschool on it, and two, Punk Rock is one of thee Folk musics of the twentieth century,with lashings of 'Hippie' hidden within its crumbling veneers. Rotten has long come out as a Folkie since the demise of his reputation.The fact that Johnny has also come out as a bit of a twat does nothing to alter this inalienable truth.
You can't get more noncommercial than this,despite the fleeting fashionable edge to it all between the years of 1969 to '71. Unaccompanied singing of yee olde tchoons from the 17th century was about as far away from Led Zeppelin as you could get....to the point that Plant and Page were envious of the Folkies' street cred...or rather, field cred.This is why the lovely Sandy Denny was press ganged into singing....for FREE by the way....on Led Zep 4,duet ting with screeching Bobby Plant for some silly track called "The Battle Of Evermoor"  apparently.I still haven't heard it to this day,and long may it remain so.
This is Dave and Toni's sole release on the Rough Trade of Folk, Topic Records,in glorious Mono. Where else could you hear about Six jolly little dancing Miners,and a horse called Creeping Jane? This stuff is weird,and No-one knows who wrote it!Like illegal Downloads on the internet...ahem!....this stuff was made for sharing....no royalties,except the Royals mentioned in the songs,and no money exchanging hands.This is how it always was, so stop moaning Pop Stars,the getting rich on a couple of days work era has ended,and we gone back to the traditional ways of enjoying music.....for FREE!
Tracklist:

A1 All Frolicking I'll Give Over
A2 The Death Of Queen Jane
A3 Creeping Jane
A4 The Merchant's Daughter Of Bristol
A5 The Bold Dragoon
A6 Cold Blows The Winter's Wind
A7 The Lark In The Morning
B1 Poor Old Horse
B2 Hey John Barleycorn
B3 Bedlam
B4 Admiral Benbow
B5 Father, Father Build Me A Boat
B6 The Press Gang
B7 Six Jolly Miners
DOWNLOAD for free HERE! and I'd offer up every Led Zep album for FREE too if they weren't so shite!
Posted by Jonny Zchivago at 08:59

I had left a comment thanking you, or so I thought. Thanks.

Spring clean your may queen

Give in to Page & Plant's underpants!

Penis, lemon and lime just for you.

Slip and slide in their goo coz you know it'll eventually be good to do.

release yo shackles it'll be a bustle in your hedgerow.

that is if you have a mangina that is!