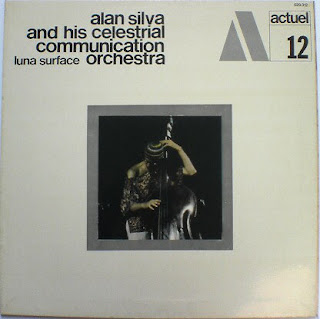 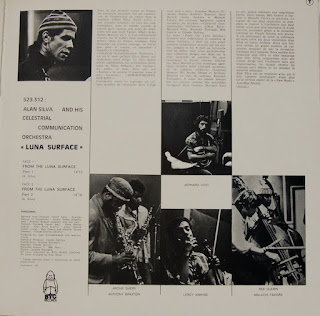 Ahhh the joy of rediscovering your musical innocence......on the Moon.
We all crave that epiphanal moment when ,as a child, we first discover something magical.....Alan Silva spent an entire career recreating that moment;but to do that you have to unlearn everything you've been taught and start all over again. These orchestral free improvised work-outs is that process in action,and it can clear a large auditorium of sensible adults in five minutes.
A deeply guarded secret at NASA is that this is the actuel sound of the Lunar Surface.The secret government of the Earth and beyond don't want us to know this fact.....it could lead to the breakdown of society are we don't want to know it anymore thanks.
As you know my bestest favourite Parlor game is 'Free Jazz Look-a-likey's', and the Shape-shifting Bass player Beb Guérin is usually the main target,although there is a suggestion of poncified French footballing legend David Ginola in his profile here.....however, another Bernard,one Benard Vitet,the wildman of the French Horn, seems to be a doppelganger for Kevin Godley of 10CC and co-inventor of the Gizmotron as featured on Godley and Creme's "Consequences triple album. Would have liked to have heard Benard having a go on the 'Gizmo' as part of his celestial communicating.
Alan Silva, is primarily a Bass player,but,as we know, Bass Players are never satisfied to be just a 'Bass Player'.Usually they are humored and ignored when they have ambitions of getting on the writing credits.This time Silva the orchestra leader, has forced his ideas onto a whole crazed free jazz orchestra....including Archie Shepp as one of his sidekicks...takes some doing that. Also there is another of the handful of appearances by Kenneth Terroade.
This is what musical instruments were invented,or discovered, to do.
Now we know the mind of God?.....yep...he's a nutter!
Tracklist:

I dig it the most!