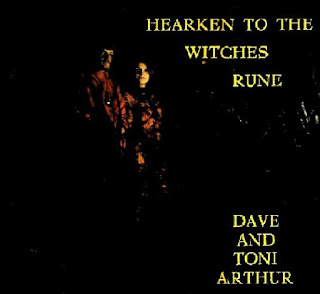 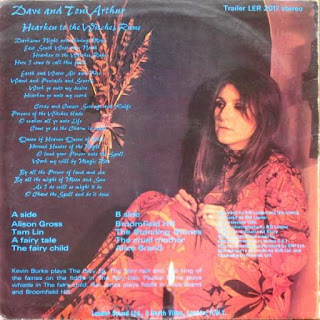 I'm sick of all this modern musick,ain't you?So my current obsession with ye olde originale DIY music,yep, Folk culture,is gonna infiltrate your psyche for the coming days,if I can escape my depressed stupor for half an hour to wax lyrical about how great this shit is.This can still clear a room of most sophisticated music fans.Its a pity Dave and Toni Arthur couldn't have supported Sleaford Mods in my fantasy fuck you bill at the last concert at the end of the universe competition.I fucking hate musical smart arses.....like us.....don't you? There's still time to burn those Beatles re-re-re-remastered,re-released,75th anniversary box sets before the balloon goes up.
Beware the fairy Fiddler of County Antrim kids!
'Twas a dangerous place for lone children in the countryside of the 17th and 18th centuries where pedophilia was just something you had to do instead of going to school.
Speaking of Schoolin', Toni Arthur found c-list celebrity fame in the UK as a presenter on groundbreaking kiddie TV show "Playschool".....she was the Hippie one,and one must say the 5 to 8 year old Zchivago experienced a subtle yet inexplicable sensation in his erogenous zone due to her womanly presence on BBC2 of a morning.(Apologies for referring to himself in the third person...purely a deliberate act for it's poetic effect)
Imagine my joy,when, as an adult, I discovered the delightful Toni was also a member of husband and wife cult folk duo, Dave and Toni Arthur?
An integral part of the UK Folk revival, Toni and Dave were ardent students of ye olde English Folk tchoons under the Ewan Macoll Dogma,sung with suitably minimal backing.No lush string sections for these puritans, no Dave Mattacks on the drums and electric guitars to propel them onto the bill of "Glastonbury Fayre",aka the first Glastonbury Festival like Fairport Convention,great though they were;.....lacking Dave Swarbrick's sartorial elegance and chain-smoking abilities,David and Tone could only sell out by making Folk LP's for kiddies to try and cash in on Toni's cult audience. Naturally, the BBC children's department was a treasure trove of Folk classics,and all were subliminally absorbed by my impressionable brain in one's formative years......Bagpuss being a shining example of this phenomena.
Toni went on to star in "Play Away",and can be seen here with a young Jeremy Irons fresh from Drama school,and the king of UK Kids Telly himself, Brain Cant....I said CANT!.....tut...honestly!?
However, this dark folk outing is the best,and rarest of their meager Discography...good gloomy cover too.
She never did warn us impressionable kids about Paddy The Handy man,or, Terrance McShane 'The Fairy Fiddler Of County Antrim' ,or even the evil leprechaun McJiminy Saville the Kiddie Fiddler of BBC television Centre,and one of Toni's colleagues. Toniiiiiii, tut tut tut!
And you're just as bad you Cant Brian (RIP)!
Tracklist:

A1 Alison Gross
A2 Tam Lin
A3 A Fairy Tale
A4 The Fairy Child
B1 Broomfield Hill
B2 The Standing Stones
B3 The Cruel Mother
B4 Alice Brand
DOWNLOAD the wicked spells from the witch of play school HERE!

The sphincters tighten when I contemplate where this may lead. Then again, if they really turn out to be room clearers, consider me braced for the flood.

I watched the vid. That wasn't Gilli Smyth?

you might like to check out last months edition of the Fortean Times magazine.a great article ont his album. David.

Hello David....yeah some kind of synchronicity in play here...I just noticed that on Facebook!....maybe something really spooky is underway?....never realized the Fortean Times was still going?

fantastic! - thanks for posting this - after reading last months FT, I was searching for it - I do remember her on Play Away etc.. xx thanks again! x

the fairy tune is just a bit of whimsical fun, what is your obsession with bringing paedophilia into everything

Oh,Whimsical Fun was it? Thanks for pointing that out for us....as for Paedophilia...just some less whimsical fun that is hardly an obsession.You should try having more Whimsical fun yourself I think.