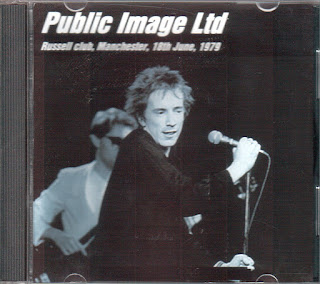 One of the first gigs to feature a standing Jah wobble,arranged at short notice after appearing on Granada TV. Tony Wilson being the producer of the programme,and known to put on nights at the Russell Club,aka 'The Factory'; was asked by Lydon if  he 'still had that club of (his)',and they 'might as well do a gig then'!
Through word of mouth alone a decent crowd turned up,and A Certain ratio supported.
The 'new' drummer,referred to throughout the performance was one Richard Dudanski,late of the pub rock legends, the 101er's.
A good quality soundboard recording of a very rare PiL appearance in 1979.

sorry to hear about yr car wreck and hospitalization! On the bright side... while you are bed-ridden, you get to engage us all with this excellent PIL-o talk ;-)

Damn it! I'm not a British citizen so I can't sign the petition to have Netanyahu's arrest as a war criminal up for debate in Parliament. Only 26k-ish more to go though....

Yeah, I remember when Malaysia found Israel guilty in their national court of War Crimes....then suddenly their commercial aircraft started falling out of the sky!.....I doubt anything will come of this petition,as israel,uk,and usa share a common govt.......but good fun....and certain to gain 100,000 signatures before the end of september.
It may change if Corbyn gets elected.

Thanks Gog, i have only one PiL boot to go....the riot show from 1981.And as i am no longer attached to a hospital bed,i can resume business as usual.