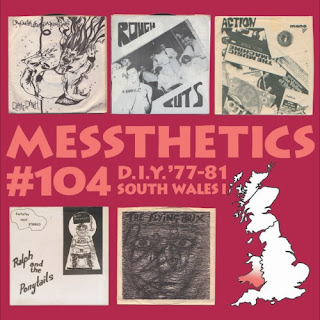 Well if you liked "Is The War Over?(a Cardiff Compilation)", you're gonna like this.
A kind of  'Best of...' South Wales DIY compilation on that Hyped2Death cd-r label that did such a great job at reintroducing the British to their own forgotten culture. Rather like what the Brits have always been doing to the Americans since 1963.
Now we all wish that these same Americans would erase their culture from the last twenty years,that introduced such heinous crimes as Nu-Metal,Rap Metal,modern R&B,99% of all Rap nonsense, Dubya,Trump,Jay Zee,that other twat who i forgot the name of,Kanye West......OMFG...the list would go on but my brain is shutting down to protect my cerebral cortex from permanent damage.
This cd-r,however, has some absolute classics on it.......Notably The Czechs 'Suffocation', which seemed to have a drum kit comprising only of a Snare drum; and The Crash Action Winners' wonderfully incompetent  version of The Red Krayola's 'Hurricane Fighter Plane'......were they the welsh 'Prats'?...I say, yes.....yes, they were the Welsh Prats. I know Wales is full of prats, but in this instance I am referring to the group of Scottish pre-teens who made a classic session for the John Peel Show, and, from before that, appeared on Fast products 'Earcom 1' compilation.
There is another appearance by future Young Marble Giants as 'Table Table', and many other,ambitionless proto-indie castaways.
Them were,unequivocally, THE DAYS!

DOWNLOAD from the welsh valleys of DIY HERE!
Posted by Jonny Zchivago at 19:01

Link takes us to is the war over!
Thanks

Thanks Johnny...keep them coming the more off centre the better

It's Andy BTW. LMFAO. I don't know anymore right now. But I was going to ask you about these. I have a few but they were hard as hell to get a few years back if you tried. Dude that put them out was ruthless at taking down others who dared try and rip off the shit he ripped of. Though we shared and he burned half ass cdr with big bottom price tags. I still bought some though. The inner notes were pretty good. At least he done that justice. Funny enough he got a taste of his own bullshit and got sued. Lesson learned... be nice and share. I love this shit. Hey Jonny whats a kanya west sound like? I imagine the beatles white album. But even darker.

How many pseudonyms do you have???.....I have all of the Messthetic regional series...i may sporadically post them when relevant.
Kanya west sounds like the cunt he undoubtedly is.

And i did indeed write OMFG.....but ironically.

@Ignorant Ear and Johnny,
I too have a long history with H2D's Chuck. I bought 29 volumes of his stuff in early 2K. Left them on the shelf for a future nostalgia binge. 10 years later, every single CD was unplayable from the crappy paper labels, disc rot, and modern optical drives. His solution? "Go find a 24x or slower vintage IDE CD-ROM drive and all will be perfect".... Not. Did not help. Update: I just discovered his home sustained a bad fire March 2016, that's not fun..

m1KES...Same thing happened to me.I bought the entire set of H2D from Chuck around 2000-01 and a few years later every one of them was unplayable.
I thought it was because they were crappy cd-r's. I never thought about the paper labels.
I binned them all except the sleeves, hoping one day to rip them from various blogs..so far I've only got 'Bad Teeth #1 & 3' and now this volume of 'Teen Line'.

Yeah Gary, those CD-rs are a bag of shit, and the fucker don't pay the groups anything then complains about copyright and free downloading!?
I have all the messthetics as rips. I'll post them someday. There's a few of the other discs like Animals and Men, Performing Ferrets, and He's Dead Jim etc while you wait......i may upload a few to zippyshare for ya as storage space if at a premium for me.Everything on my blog is active and it take lotza space.