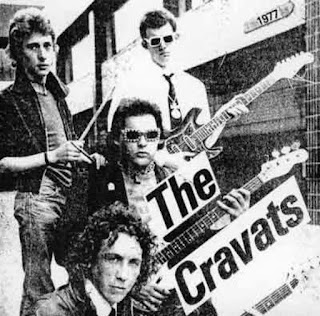 Who were the real UK version of Peter Brontzmann's 'Last Exit' if it wasn't Sting's Geordie jazz funk outfit from '74/'75 then?......The Cravats of course!?.....They had a sax player called Svor Naan for one. Any band that had a  Sax player in the ranks would automatically be labelled 'Jazz' something.Jazz Rock, Jazz Funk, or in The Cravats case, 'Jazz Punk' ? This never happened to X-Ray Spex or Theatre Of Hate for some reason,,mainly because their Saxophonists, or Saxophonies, couldn't play anything more than a basic melody line. Not much Sax on this tape however,as it comes from The Cravats dark brummy beginnings,and various off shoots associated with original drummer Martin de Sey.
The vast majority of The Cravats output,including all their excellent Peel Sessions, can be found by clicking this......"Everything The Cravats Ever Did"
"Once Upon A Time In Redditch" comprises the tracks from a C60 compilation,original Cravats sticksman, Martin de Sey, made back in 1983, and has somehow found its way into the Die or DIY? files. It includes some Cravats Demo's,and various groups Martin was involved in post-Cravats,including the A and B sides of the one 7" released by Martin's Girl Guided Missiles in 1979.
De Sey was a founding member of the Cravats, along with Ethos Yapp, Robin Dallaway, and the Shend. Tracks 1-7 are the demo tracks he recorded with them, before someone hit the eject button.
The Girl Guided Missiles were Martin with Adrian Garlick on bass, Steve Franklin on guitar and the peculiar falsetto vocals you'll hear, and Nick Raybould on drums. I presume the Missiles were a related thing. I've no idea about the T-Killers, beyond that the name was a double duty reference to Marc Bolan and Alice Cooper - not his finest work but never mind.
So, I suppose you could say this is a tape of the Pete Best of the Cravats, or something?
The Cravats

By the sound of "Precinct" I'd say you accidentally posted some Fabulous Poodles demos.

All groups go through a Fabulous Poodles phase don't they?

Sax players get all the chicks.

Yesss, Cravats have punked out the free jazzers and dada-skronked out the conservative punks I've known… but for me they're one of the (few?) bands of that era/scene that still gives inspiration. If they even were part of a 'scene,' I don't know I wasn't there. I had a bit of a correspondence with the Shend around 10 yrs ago, was trying to connect him with a booker for a USA tour (didn't pan out then, or ever? I lost the thread, but that's another story), anyway, happy to say that, judging by his emails, the Shend seemed the good sort of human. And more recently the Cravats have been releasing troves of demos, rehearsals, etc. on their bandcamp page…well compiled stuff with a healthy quotient of the dada-esque. Throw yer money at them, peoples!! They had a guest vocalist called Chewy Parf for fucks sake!

The junkyard WAS Redditch.

Big fan of The Cravats many thanks for sharing this Reb

I'm Martin De Sey and I've never played the drums in my life, I wouldn't know where to start. Ethos Yapp played the drums, and still does, but to me it's a dark art. I'm also still trying to learn how to play the guitar after nearly 50 years . . .

Thank you so much for making this available! I've been a fan of the Cravats for 40+ years (and finally got to see them play live in 2017), but I'd never heard this stuff before, or even knew of its existence. It's fascinating to hear early versions of favourites like "Precinct" and "Pressure Sellers" that are almost unrecognisable as the songs they became on their early 80s record.

Good to hear the T-Killers' take on the Cravs' "Live for Now" too!!