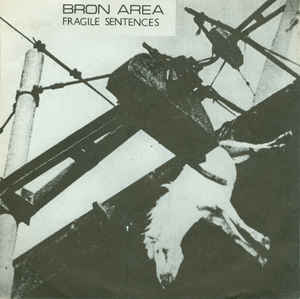 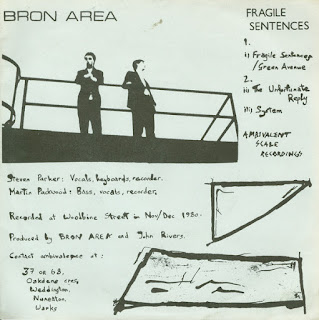 OK, so i've been informed that Eyeless in Gaza met at a Bron Area gig, but when did the they both start sounding like each other?
Eyeless In Gaza had two albums out in 1981, so I'm assuming that they got there first?'There',being 'The Nuneaton Sound' I suppose?
It does tend to happen in local scenes, where everyone seems to adopt the same style, and sound alike, even unconsciously? From MerseyBeat onwards this has been a fact,and a demonstration of the Human pack instinct in action.
If there's anyone out there who don't know what Eyeless In Gaza sound like.......no I won't say Bron Area,tempting though it is.
Think, minimal electronics, naked guitar slashing, in yer face over emotive vocalising in a shoutier sub- Billy Mackenzie slow vibrato stylee,but without the high notes.That's Bron Area in Gaza for ya!
Despite that its good stuff,or at least 'was' good stuff, until eyeless got far too sophisticated and self-consciously 'experimental'.....as for Bron Area, they should have stopped after this DIY single/EP.

A2 Green Avenue
B1 The Unfortunate Reply
B2 System

Well, I know who Eyeless in Gaza were, but Bron Area are new to me. I like them a lot.

Thanks much for this and "One Year"! Hard to find & happy to hear :)