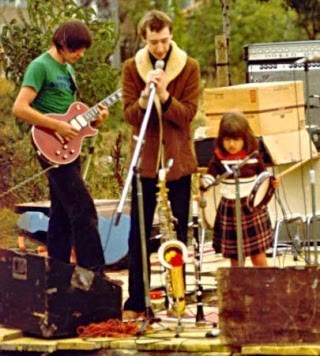 From bedroom land in downtown Grimsby, cometh The Instant Automatons, the Grandaddys of the Cassette scene of the late 70's early eighties........and they played live too!
Mark and Protag stepped out from the safety of the bedroom and churned out these fine performances to a disbelieving world between 1980 and 1982. The recorded sound of sparse applause can be heard.(The Instant Auto's can be seen pictured above,with un-named member,performing at Acklam Hall's Street Level Festival 1980-ish).

"Strange people from the North descending on the capital with only a drum machine for company. The Idiot Ballroom our Grouchos, gigs at Meanwhile Gardens with Trellick Tower (the tallest flatblock in Europe) as a backdrop. Mark intoning "Too big, too big" while Protag groped at his bass with insect hands. The sweet madness of free concerts. The discovery of "Bad Music" – now known as "LO-FI". Using no budget to create joy. Doing it all because we cared.
Where was this strange planet called Scunthorpe? Will we ever see their like again? I hope so, but I'm not so sure.
Treasure this document of weirdness – if we aim for the moon we might just get up the stairs.
Instant Automatons, we salute you..."


Track Listing, but not necessarily in this order!!!

Nothing Ever Happens To Me
Ignorance Is Bliss
Lower Third
Short Haired Man
Too Big/The Story Of My Wife
Catacomb
Emma
Eyes Like Saucers/Scared To Be Alone
Drunk In Woolwich
Monotony
Baby, Burn Your Clothes
The New Dylan
Brains Under Glass
August ‘78
Failure (Is Just A State Of Mind)
The tracks in this collection were recorded at the following venues:

The "un-named member" in the photo is Mic Woods' eldest daughter Melanie (who must be well into her thirties by now). Even at 8 years old, she could play a mean tambourine.